This Spring, the COVID-19 pandemic laid bare the injustices and inequality across the nation, forcing the nation to really pay attention. The killings of Ahmad Arbury, Breonna Taylor, George Floyd, and many other Black men and women reverberated throughout our homes and communities and people in cities across America took to the streets to protest racism and police brutality. For many, this was a time of reckoning and together the entire Belfer Center staff looked for ways to identify and dismantle systemic racism in their professional and personal lives.

Lauren Zabierek, the Executive Director of the Cyber Project, knew that while she had approached diversity in cybersecurity through a gender equity lens, she could do far better in her role to champion racial diversity as well. She made a commitment to herself and on social media writing, “I will work to identify and lift up Black voices in this field. This includes examining and expanding my network, more inclusive programming, and doing a better job in seeking out Black candidates through more intentional and thoughtful hiring language and making sure we look for candidates outside of the old pipelines.”

But words require action to create impact. In early June, the #ShareTheMicNow campaign (created by Bozoma St. John among others) debuted on Instagram, highlighting Black women in the entertainment industry. Feeling the spark of inspiration, Lauren believed a similar campaign could be done in national security and shared her thoughts with Maggie Feldman-Piltch, CEO and founder of NatSecGirlSquad. 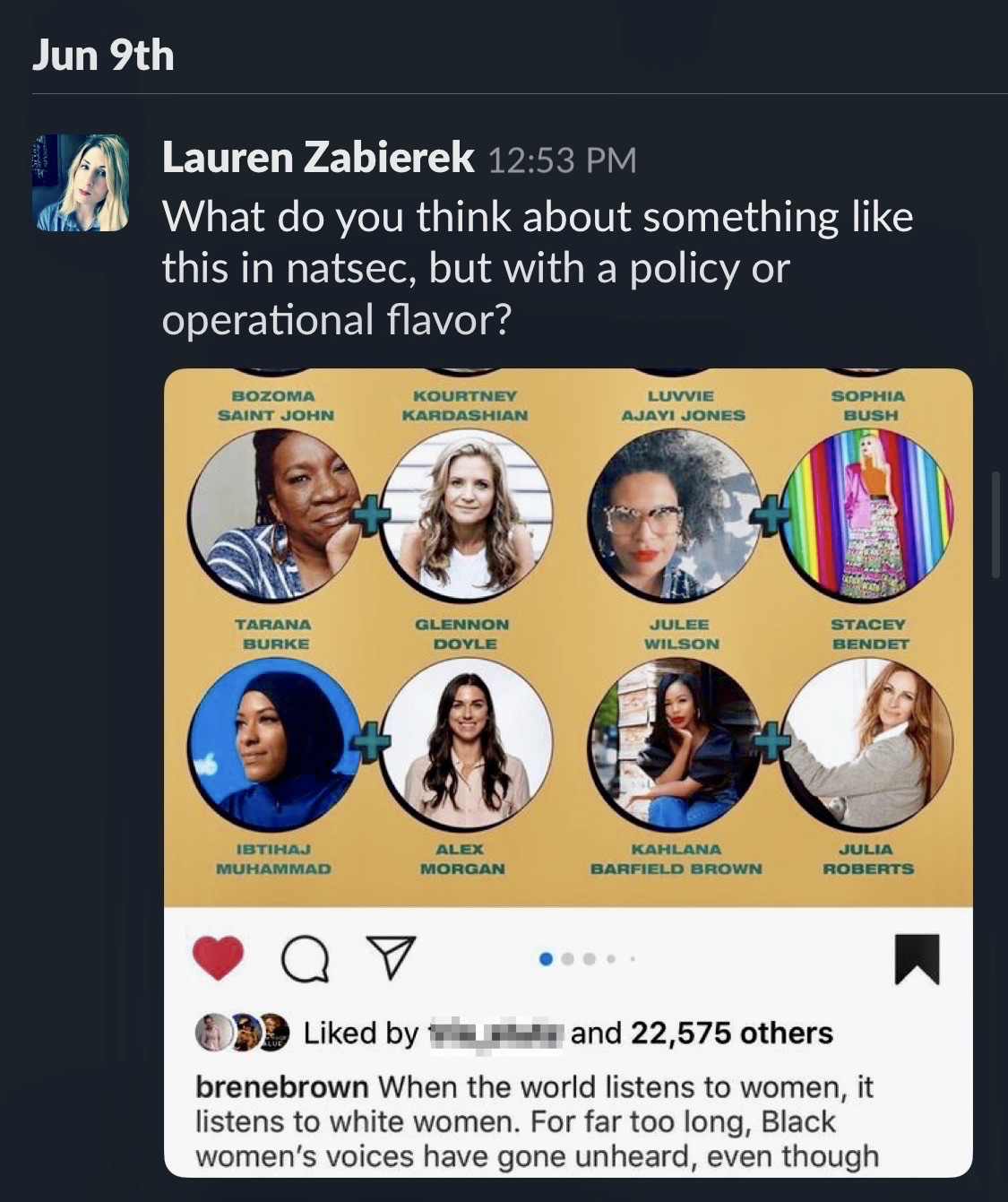 Meanwhile, Camille Stewart, Head of Security Policy & Election Integrity for Google Play & Android (and now a Cyber Project nonresident fellow), had the same thought. She tweeted about creating a similar campaign in cybersecurity and national security and though she and Lauren didn’t follow each other, somehow Lauren saw the tweet and she immediately responded. #ShareTheMicInCyber was born. 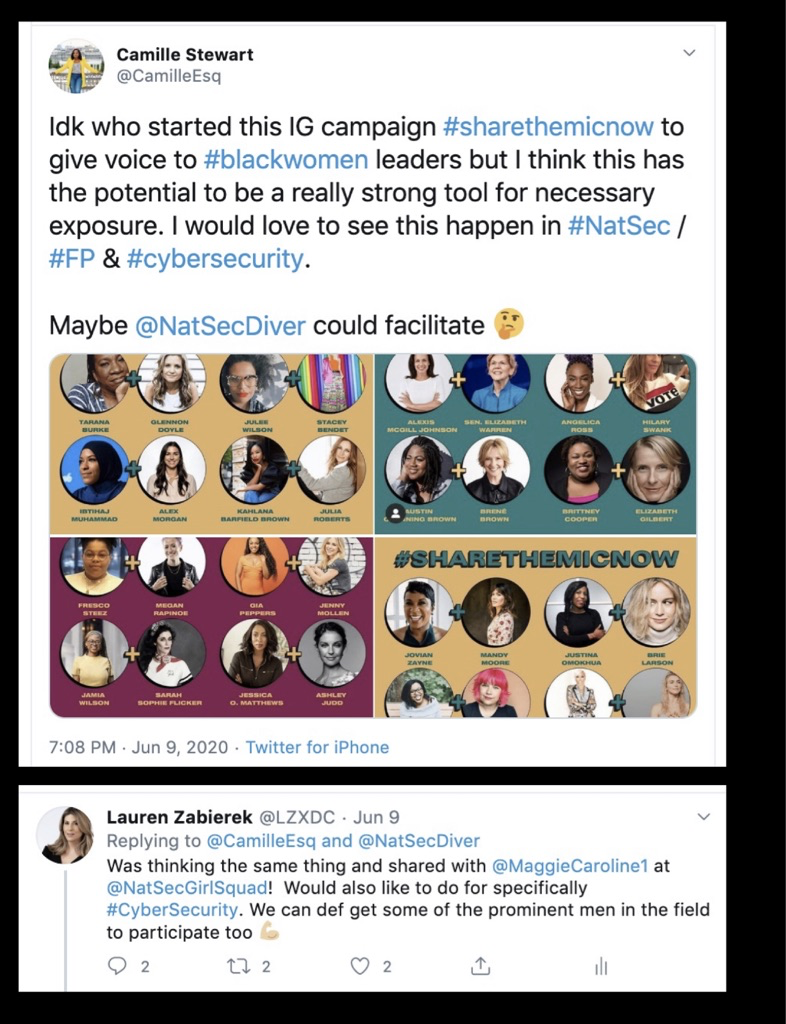 Throughout weeks of behind-the-scenes preparation, Lauren and Camille reached out to their networks to recruit well-known cyber “Allies” to request they share their social media platforms on Twitter and LinkedIn with lesser-known Black Practitioners in cybersecurity; the response was immediate and positive, with over 40 pairs of Allies and Practitioners signed up to participate.  Lauren, Camille, and Belfer Center Summer Intern Sahar Kazranian created graphics, social media language, detailed instruction guides for all the participants, and recruited organizations and influencers to help promote the campaign.

On June 26, the campaign launched and the Black Practitioners shared their professional goals and personal stories, filled with both heartbreaking experiences of racism as well as successes in spite of it.  Neither Lauren nor Camille anticipated the impact of the event. #ShareTheMicInCyber shined a light on the many Black cybersecurity professionals already in the industry working hard with little recognition and it also opened up new opportunities for the participants. Some were asked to join calls and advisory boards and others were introduced to influential people in the industry. Rachel Tobac of Women in Security and Privacy (WISP) raised over $30,000 to sponsor certifications, training, and educational expenses for Practitioners.  Some of the notable Allies included former PDDNI and Belfer Center Senior Fellow Sue Gordon, Former DHS Undersecretary for Cyber and Infrastructure Suzanne Spaulding, and Craig Newmark, founder of Craigslist. 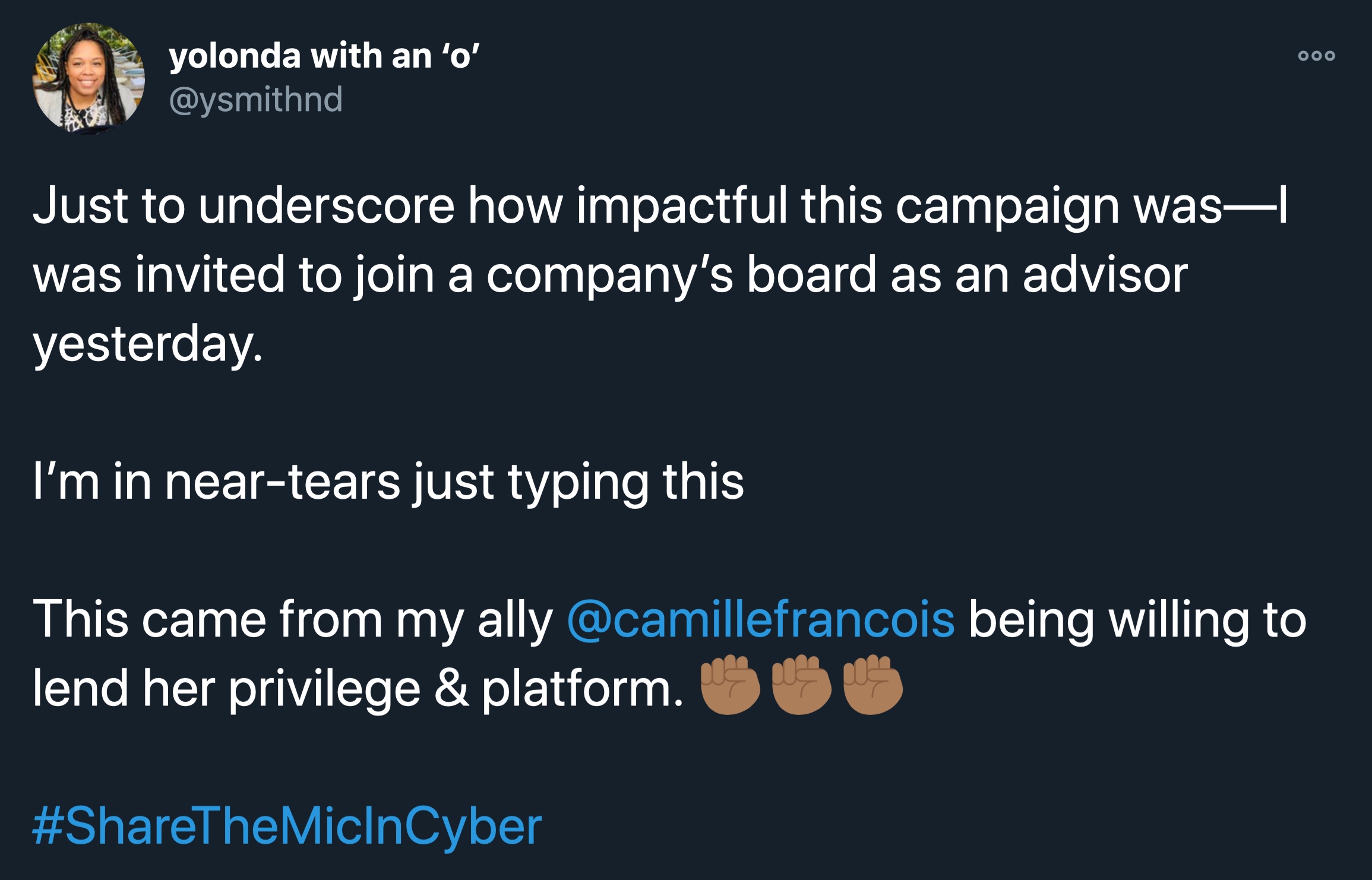 Building off the success of the June 26 event, Lauren and Camille decided to do an even bigger push during October Cybersecurity Awareness Month. They brought on Katelyn Ringrose, a Future of Privacy Fellow to help with the logistics and recruiting and pairing more Allies and Practitioners with Lauren out on maternity leave. The October 23rd #ShareTheMicInCyber event had an even bigger impact—by end of day, there were over 14 million Twitter impressions with almost 7,000 individuals engaged. Rachel raised over $60,000 for the scholarship fund, ensuring all our Practitioner training requests could be covered.  #ShareTheMicInCyber is a movement and Lauren and Camille will continue to work together to end systemic racism in cybersecurity and national security. 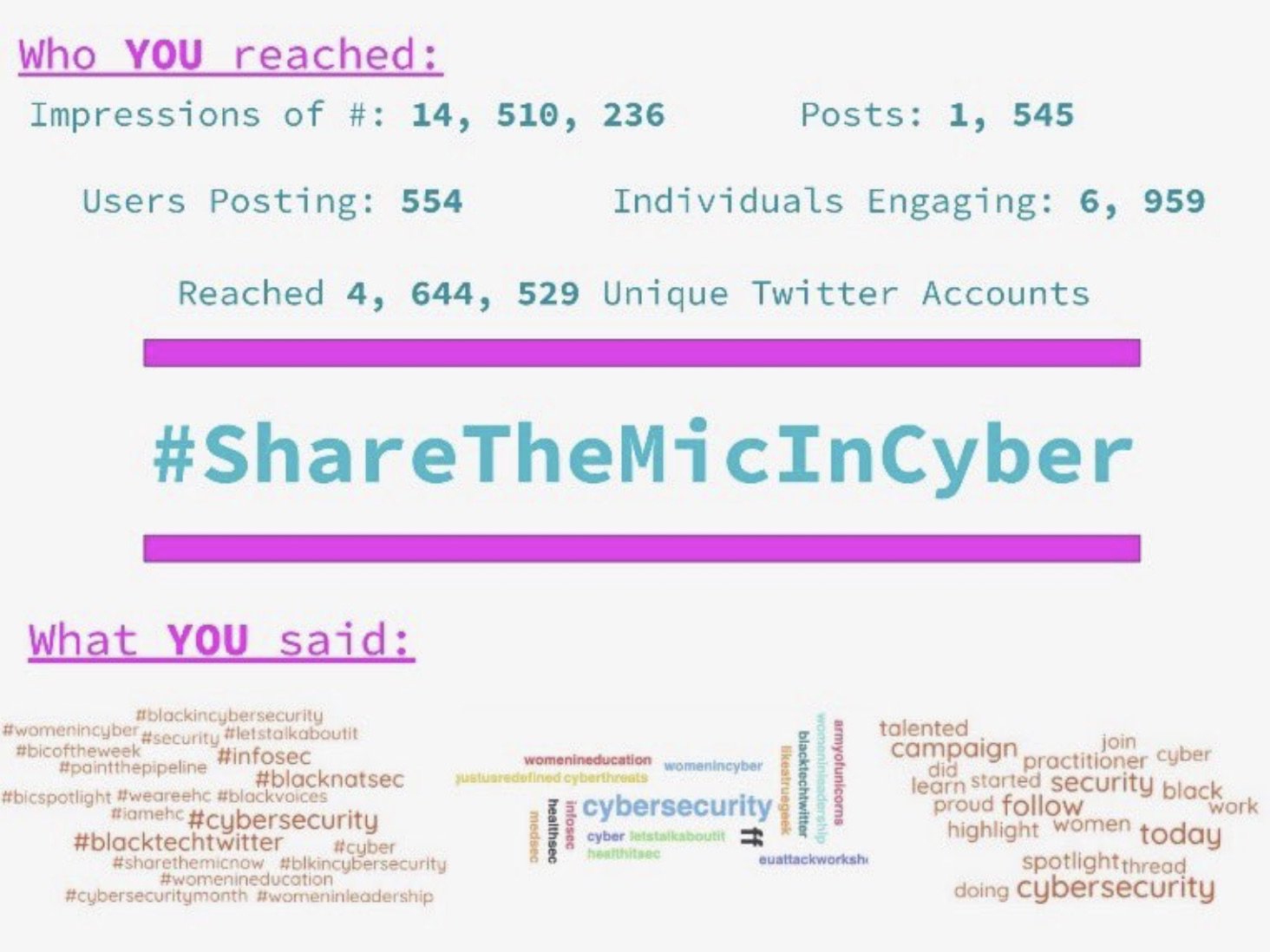 If confirmed by the Senate, Ambassador Power will take the helm of a $20 billion agency with offices in more than 100 countries.
More on Samantha Power

The Arab Spring at 10: Kings or People?

If democracy is to come to the Arab world, it will not be because autocrats were hectored into granting it. It will be because democracy won the argument.
More from Tarek Masoud