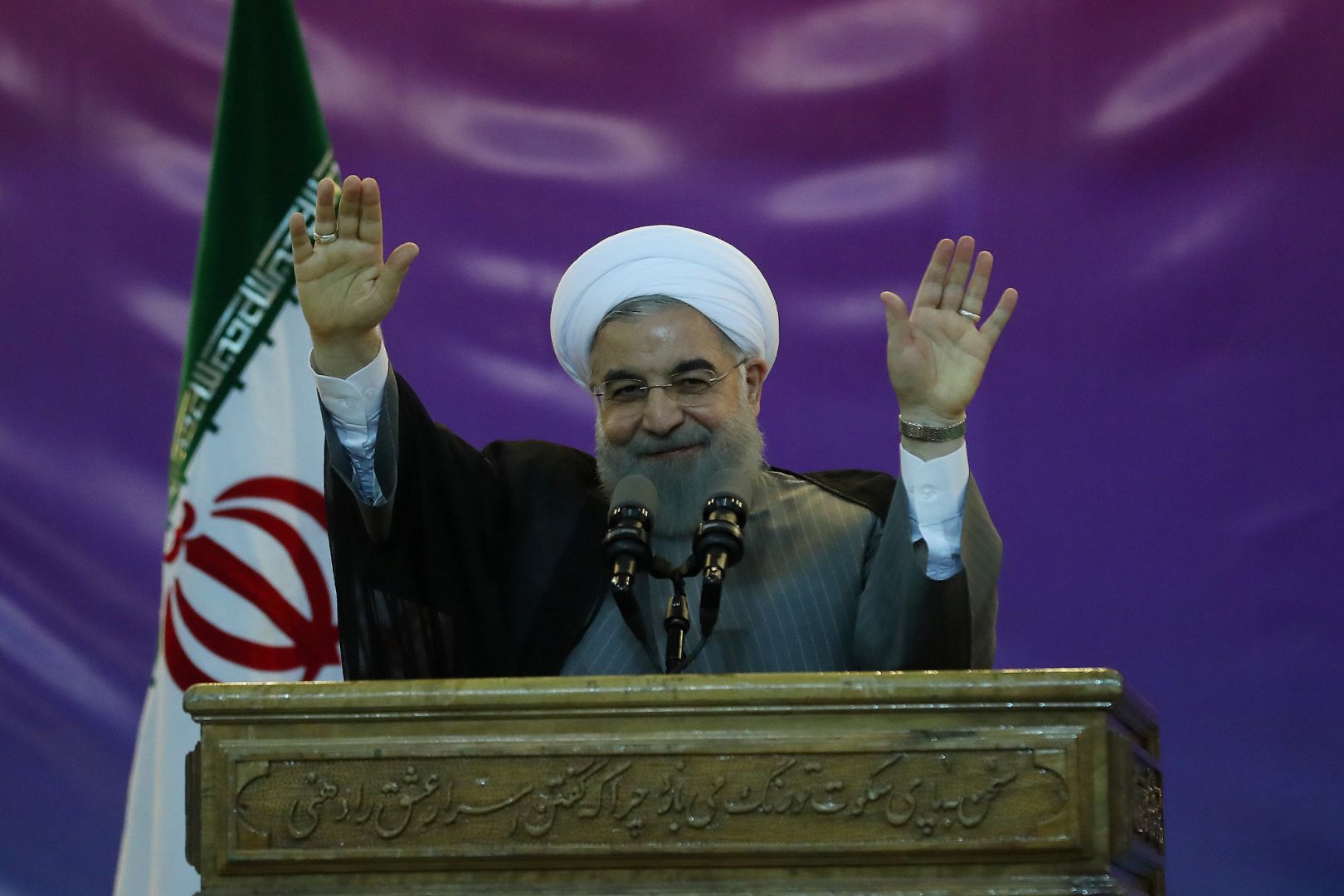 Hassan Rouhani’s reelection as president of Iran by an impressive margin was not a given. There were good reasons for suspecting he might be defeated. He had tough, powerful opponents, such as the radical wing of the regime, including the Revolutionary Guards, and the religious establishment. The Basij militias, subordinate to the Revolutionary Guards, could have exploited their widespread deployment in the country to bring masses to the ballot boxes. As is his wont, Supreme Leader Khamenei did not express explicit support for any of the candidates, but expressed displeasure with some aspects of Rouhani’s policy. According to common assessments, he supported the conservative candidate Ibrahim Raisi. Moreover, while the signing of the nuclear agreement, which most of the public supported, as did Khamenei, was mostly attributed to Rouhani, the president was roundly criticized by his rivals for failing to lift all the sanctions, and improve the economic conditions.

More importantly, although there has been a certain improvement in Iran’s economic distress in several areas thanks to the reduction of the sanctions, this is not sufficiently apparent, at least as far as parts of the public are concerned, and in some important fields – e.g., the rate of unemployment among the young, especially the educated young – there has been no real improvement. The key to further improvements depended on the lifting of the rest of the sanctions and other economic help, which in turn depended to a large extent on expanding the dialog with the United States and a change in the quality of Iran’s relations with it, and this was not achieved because of Khamenei’s opposition.

Despite the frustration with Rouhani’s less than stellar achievements, he was elected by a wide margin, for several reasons. His main rival, Raisi, was not sufficiently known and did not stand out from the pack until late in the presidential campaign. And the fact that he had served as the deputy attorney general of Tehran during the period of mass executions of political prisoners in 1988 did not stand him in good stead. Clearly, a significant segment of the public did not wish for such a figure to serve as president. All in all, he was insufficiently attractive, despite the support he garnered from the religious establishment and radical camp, and he was unable to defeat Rouhani.

But the size of the margin by which Rouhani won chiefly reflects the fact that many Iranians want regime change. They desire more political freedom, real improvement to the economy, less regime interference in their private lives, and much less corruption. As such, the conservative Raisi could not stand for change. And large population segments – especially the urban, the young, the educated, and the women – voted for Rouhani, despite their disappointment with his limited success, because he was much better than his rivals and represented an expectation that in his second term he may achieve more.

What can we expect from Rouhani’s second term? The large majority with which he won does not change the basic fact that the number one decision-maker in Iran remains Supreme Leader Khamenei. It is doubtful that Rouhani’s large majority will translate into greater power vis-à-vis Khamenei and the regime’s radical wing, and the president will likely continue to depend on them. Furthermore, Rouhani’s sweeping victory will undoubtedly be viewed with concern by the radical camp, which sees him as a rival  and a threat. The Revolutionary Guards are concerned that he has long intended to wrest from their hands some of the vast economic resources they control, which have given them a central role in the Iranian economy, as well as political clout. The threat and concern might lead to an exacerbation of the struggle between the political camps in Iran.

Therefore, as long as Khamenei leads the Iranian regime, Rouhani’s ability to change its approach and policy will be limited, including his ability to affect relations with the United States. In his first term, Rouhani let it be known that he sought to expand the dialog and reach understandings with the United States, but Khamenei blocked the path and banned any dialog with the American administration on anything other than the nuclear issue. One may assume that this situation will not change in the near future. Moreover, in recent years Iran expanded its activities and influence in other Middle East nations: it built new Shia militias, in addition to Hezbollah, and sent them to fight in Syria – a factor that will help it wield its influence throughout the region; it held tests to improve its ballistic missiles; and it continues to support terrorism. It is safe to assume that at least some of these activities were carried out to Rouhani’s chagrin but that he was unable to prevent or even reduce them. Also, increased tension with Saudi Arabia, in part because of Iran’s intervention in Yemen, is in contrast to Rouhani’s approach, who has sought to improve relations with the kingdom.

A key question for the coming period will remain Iran’s economy whose improvement will continue to depend, in part, on Iranian-U.S. relations. Khamenei’s suspiciousness of the U.S. administration’s aims, his refusal to expand the dialog with the administration, the Trump administration’s belief that Iran has never given up on its intent to acquire nuclear weapons, the penetration of Iran’s influence into other Middle East states, and its involvement in terrorism – all of these will make it very difficult to achieve any improvement in relations between the United States and Iran, all the more so as the Trump administration intends to take a hard line on Iran and try to isolate it. If that happens, chances that the remaining sanctions against Iran will be lifted are low, and the administration may in fact impose new sanctions. Under these circumstances, opportunities for significantly improving Iran’s economic conditions will be limited, especially because the Iranian economy suffers from structural problems, including the fact that the Revolutionary Guards control large chunks of the economy, its difficulties in integrating into the global economy and the international banking system, a virtual stranglehold on the private sector, and widespread corruption.

For now, is seems that the nuclear question will not be the center of attention. Iran’s leadership, including Khamenei, understands that the right approach is not to blatantly violate the nuclear agreement; they understand they must wait a few years until the limitations on the nuclear program are lifted. Also, Trump’s intention to take a hard line on Iran should deter Iran’s leaders and dictate a cautious, non-confrontational policy when it comes to the nuclear issue.

But it is necessary to remember that, in the foreseeable future, perhaps even during Rouhani’s second presidential term, Khamenei can be expected to step down for health or age reasons and that his replacement will be elected. At present, there is no way to know who that might be and what his policy might look like. But one can assume that, at least during the initial part of his term, he will not have the same power and impact enjoyed by Khamenei, who has been in power since 1989. His replacement will need more than a little time to build his power base and authority. It is also unclear if he will be a religious figure like Khamenei – the most likely probability – or a security-military or political figure, or if there will be a change in the top leadership structure. Such uncertainties could mean a period of power struggles – perhaps even violent – between radicals and moderates over the nature and policies of the Iranian regime.

If this happens, it could spell Rouhani’s golden hour. The vacuum left by Khamenei could position Rouhani as the most prominent and experienced of Iran’s leader, with the recent election proving that he enjoys the support of most Iranians. If this is how matters develop and if Rouhani overpowers his rivals in the radical camp, it could be the start of change in the nature of the Iranian regime.

Ephraim Kam served as a colonel in the Research Division of IDF Military Intelligence until 1993, when he joined the Jaffee Center. Positions he held in the IDF included assistant director of the Research Division for Evaluation and senior instructor at the IDF's National Defense College. He specializes in security problems of the Middle East, strategic intelligence, and Israel's national security issues. His book Surprise Attack: The Victim's Perspective was published by Harvard University Press and was awarded the 1988 prize for best book on intelligence matters from the National Intelligence Study Center, Washington, D.C. He is also the author of From Terror to Nuclear Bombs: The Significance of the Iranian Threat (2004) and A Nuclear Iran: What Does it Mean, and What Can be Done (2007).