Snapshot of Nonproliferation Budget Process for 2015

Last week, the House and Senate agreed on a budget to fund the federal government—including nonproliferation and nuclear security programs—through fiscal year 2015. Despite its participation in the Nuclear Security Summit earlier in 2014 and strong rhetoric from President Obama about the need to prioritize nuclear security, his administration proposed cutting spending on programs to strengthen security for nuclear weapons useable material for the third year in a row. In response, twenty-six Senators signed a letter to the Obama administration requesting that funding for nonproliferation and nuclear security programs be increased.

Although the Cromnibus bill would increase funding for U.S. nonproliferation programs above what the Obama administration requested, it would reduce funding for the programs that make the biggest direct impact on improving security for facilities with nuclear materials: the Global Threat Reduction Initiative (GTRI) and the International Material Protection and Cooperation (IMPC) programs.

Most notably, the bill would cut all funding—more than $90 million—for GTRI and IMPC work in Russia. This comes less than a week after House and Senate Armed Services Committees reaffirmed the importance of this work in the Defense Authorization bill. There is, however, enough unspent money within U.S. nonproliferation programs to fund most nuclear security work in Russia through 2015 if Russian officials allow this cooperation to continue. 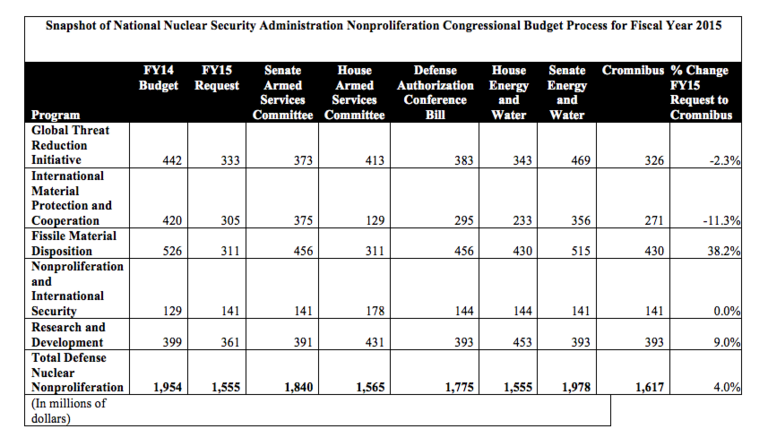 1. The “Cromnibus” is a hybrid piece of legislation that crosses an Omnibus bill, which combines a number of smaller appropriations bills, with a Continuing Resolution, which typically continues government spending at current rates.
2. The Cromnibus provides $1,641,369,000 for nonproliferation programs, but rescinds $24,731,000 in funds not apportioned to the Department of Energy in Fiscal Year 2013 or 2014. Within the fissile materials disposition program, the Cromnibus also provides $345 million for continuing construction of the Mixed Oxide Fuel (MOX) Fabrication Facility and prohibits the National Nuclear Security Administration from placing the project in “cold standby” in fiscal year 2015. The Obama administration placed the MOX program in cold standby because of questions about the program’s viability.
3. The Cromnibus allocates $103 million within NNSA Nonproliferation Programs for Legacy Contractor Pensions.
4. Russia has indicated that it may not be interested in continuing cooperative work with the United States to improve security at Russian facilities with nuclear material past 2014.