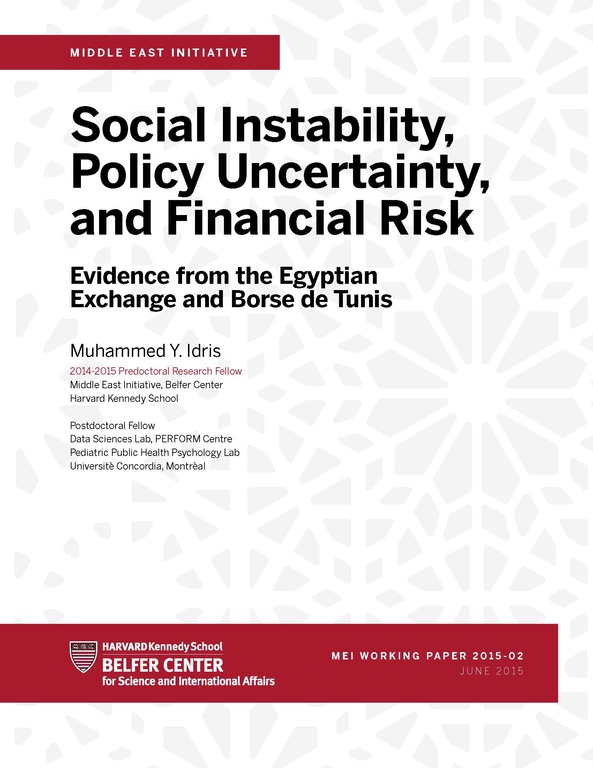 For better or worse, financial markets are a cornerstone of the global economy. On one hand, they contribute to economic growth by facilitating the allocation of capital and resources between savers and entrepreneurs, reducing informational asymmetries, and enabling diligent risk management (e.g., Shine, 2013). Positive financial performance is generally a signal of favorable economic activity, and studies focusing on the finance-growth nexus find a strong (and arguably causal) relationship between financial and economic development (King and Levine, 1993). On the other hand, increasingly interconnected and complex financial markets can also generate negative externalities. Lay investors (e.g., retirees and pensioners), for example, are particularly vulnerable to negative changes in market conditions which affect their net worth (Bernhard and Leblang, 2006). Also, an increasing reliance on capital markets for sovereign financing can make national policy making sensitive to the preferences of global markets (rather than to constituents) which can further weakens financial systems during periods of crisis (Mosley, 2003; Merler, Pisani-Ferry et al., 2012).

In light of these potentially significant social costs and benefits, political economists have long been interested in the causes and consequences of financial market outcomes. This study contributes to studies that focus on the influence of conflictual forms of political contestation, such as terrorism (Eldor and Melnick, 2004; Arin, Ciferri and Spagnolo, 2008; Chesney, Reshetar and Karaman, 2011), war (Frey and Waldenstrom, 2004; Rigobon and Sack, 2005), and protest demonstrations (Pruitt and Friedman, 1986; Epstein and Schnietz, 2002; King and Soule, 2007). These events are common in both democracies and dictatorships, and are often a signal of increasing social discontent. By fueling political uncertainty, socio-political instability may have a negative effect on a variety of economic outcomes, which in turn influences investor sentiment and by extension financial market performance (Alesina and Perotti, 1996). Here, I examine how socio-political instability in the Middle East and North Africa (MENA), and in particular the "Arab Spring" movements of the early and mid 2010s, influenced financial markets throughout the region.

To be sure, this is not the first study to consider the effect of the Arab Spring on domestic markets. Recent work by Mousavi and Ouenniche (2014) finds that political conflict throughout the region significantly impacted risk and returns on domestic stock and commodity markets. Also, Abdelbaki (2013) finds a strong and consistent relationship between the (2011) Friday protests in Tahrir square and changes in market indices on the Egyptian Exchange.

This study builds on this work by providing a more nuanced explanation of financial market reactions to political instability, one rooted in the micro-foundations of political risk assessment within investment management. I argue that investors do not care about political instability in and of itself. What financial market participants care about instead is how instability influences the risk associated with uncertain returns under different policy regimes. Where instability provides new information about policy uncertainty, they reallocate their portfolios to reflect this new exposure to political risk. Trader assessments of policy uncertainty increase when the risk of government turnover increases (ex-ante), and is at its highest when regime turnover occurs (ex-post). These insights are based in part on the experiences of various financial market professionals; some of whom are based in the region and were actively trading during the Arab Spring. In distinguishing between ex-ante and ex-post mechanisms of turnover, I test two causal mechanisms related political uncertainty to financial market reactions.