The Obama administration is proposing to boost Department of Energy nonproliferation funding to $1.94 billion—more than a $300 million increase from what Congress appropriated last year—in fiscal year 2016. But this is an increase over the very low fiscal year 2015 budget proposed by the administration and then further cut by Congress. Both Congress and the Russian government have cut back on further U.S.-funded nuclear security work in Russia, and the Obama administration has yet to develop major new initiatives that could absorb those resources.

In the proposed budget, $513 million – a $57 million boost above what Congress allocated for fiscal year 2015 – would go to programs that improve security for nuclear material around the world.

More than two-thirds of the apparent increase for nonproliferation programs, $234 million, comes from moving nuclear counter-terrorism and emergency response into the nonproliferation account, though these had previously been counted separately. Most of the rest comes from a $26 million increase for the nonproliferation research and development subprogram and a $45 million increase funding for removing vulnerable nuclear material. The budget proposes $345 million to continue construction of the controversial plutonium-uranium mixed oxide (MOX) fuel fabrication plant for plutonium disposition, despite an estimated life-cycle cost now over $30 billion. 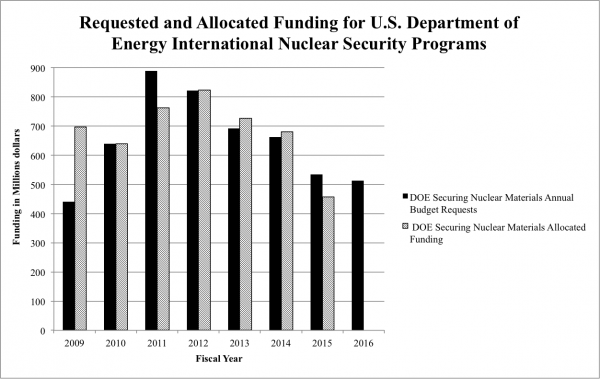 For more analysis of the fiscal year 2016 budget request for Department of Energy Nonproliferation Programs, you can also check out the Center for Arms Control and Nonproliferation’s factsheet on the topic.