German Chancellor Angela Merkel delivers a speech about German government's policies to combat the spread of the coronavirus and COVID-19 disease at the parliament Bundestag, in Berlin, Germany, Thursday, Oct. 29, 2020.

What We Can Learn From the Wonder Women of COVID-19

Ambassador Wendy R. Sherman, Director of the Center for Public Leadership and Professor of the Practice of Public Leadership, Harvard Kennedy School, served as academic advisor for this research in connection with her summer seminar “Leadership in the Time of Coronavirus: Have Women Been Better Leaders?” supported by Izzy Ernst, MPA 2021, and Grace Pringle, MPP 2020, as Research Assistants, as well as Siena Lerner-Gill, senior high school student at Buckingham Browne & Nichols School, and Charlotte Rediker, junior high school student at Phillips Academy.

The one good news story of 2020 seems to have been the rise of female leadership. In April, a Washington Post headline declared that female leaders were “hailed as voices of reason amid the coronavirus chaos.” High-profile figures like German Chancellor Angela Merkel and Taiwan President Tsai Ing-wen emerged as perfect foils to UK Prime Minister Boris Johnson and U.S. President Donald Trump.

Since then, our research confirmed that male-led countries had 1.9 times more COVID-19 deaths per million than their female counterparts during the first five months after outbreak or roughly the first wave of coronavirus.1 However, despite the appealing headlines, our research also found that there is a catch: female leaders did not perform better because of their sex, but rather because of their leadership skills.

These traits roughly track with leadership research that suggests that female leaders are more likely to be participative or democratic, other-directed, and risk averse. In contrast, male leaders tend to be authoritarian, self-directed, and risk-takers. These trends may be explained by socialization and experiences of women. As Professor Zoe Marks notes, “women in male-dominated fields often incur penalties for assertive, power-seeking behavior.” Men and white people also tend to perceive risks as less likely than women and people of color respectively.

However, it turns out none of the leadership behaviors we analyzed are correlated with women any more than with men. Successful leaders with the fewest COVID-19 deaths—wonder woman New Zealand Prime Minister Jacinda Ardern as well as Australian Prime Minister Scott Morrison—share two leadership traits in common: early, decisive action and clear, instructive communication. They locked down earlier and communicated clearly, plainly explaining harsh realities, instructions and warnings. No one can argue that President Trump’s statement that “like a miracle, [COVID] will disappear” has aged well. 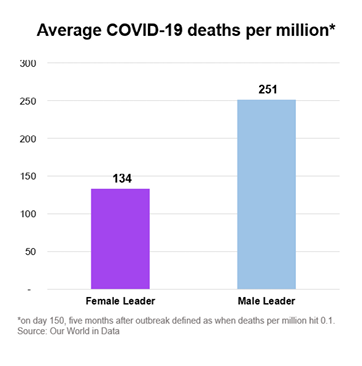 This research focused on the OECD2 where almost 30 percent of the 37 democratic, highly developed countries are led by women, compared to 8 percent globally.3 Five months into the outbreak, 90 percent of female-led countries had lower than the average number of COVID-19 deaths, and 64 percent were above the median for fewest total COVID-19 deaths per million. The same was true when measuring excess mortality.4 Female-led countries had 55 percent fewer excess deaths per million on average compared to their male counterparts. The one striking exception was female-led Belgium, however, there has been debate whether Belgium attributes too many—or perhaps more accurately—deaths to COVID-19.

We considered whether societies that elect women may have uniquely progressive institutions with greater social safety nets. This did not appear to be the case. Male-led countries that have previously elected a female leader still had 1.4 times more deaths per million than female-led countries. The gender gap is sliced in half but does not disappear. Other factors, such as population density or age, could not fully explain the relationship between fewer COVID-19 deaths and female leaders. This suggests that institutions and demographics are only part of the picture; leadership may fill in the rest.

Of the top 50 percent of countries with the fewest deaths, 78 percent took at least two lockdown measures (stay-at-home orders, closing schools, restricting international travel) before outbreak, whereas some of the worst performers took none (Belgium, the UK, Spain, Sweden, and the U.S.).5 Women were slightly less likely to take early action than men: 55 percent of female-led countries took two lockdown measures before outbreak compared to 62 percent of male-led countries.

Top performers were better communicators, but not more empathetic

Analyzing press conferences with leaders of New Zealand (Jacinda Ardern), Germany (Angela Merkel), Australia (Scott Morrison), the U.S. (President Trump), and Canada (Justin Trudeau) at the start of lockdown,6 we found that countries with fewer COVID-19 deaths were correlated with clearly instructing and setting expectations, but not empathy or listening to experts.7 While it is difficult to isolate the impact of individual leaders, studies suggest that leaders’ public statements affect compliance with social distancing recommendations, especially when the individual trusts the leader. Contrary to the narrative that women are more empathetic or collaborative leaders,we found no meaningful correlation between gender and any of these traits. 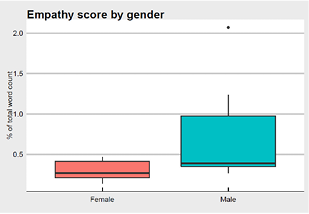 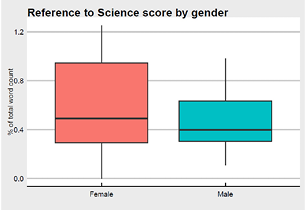 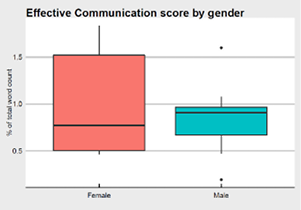 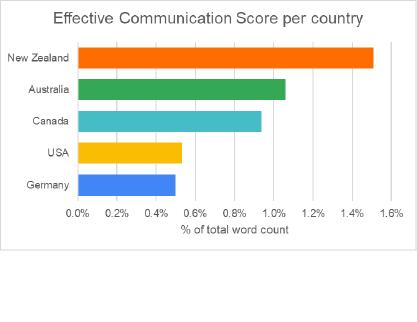 Ardern and Morrison—in the top five for the lowest number of COVID-19 deaths—scored highest on setting expectations, by emphasizing exactly what to expect and how to act. Morrison emphasized that no one should “get the impression that these arrangements are things that will be in place for a couple of weeks or a month and then will be discarded and everything will be OK.” Ardern underscored individual responsibility, “[if] you try to go to work or you carry on as usual, you are literally putting at risk those who have to be there.” 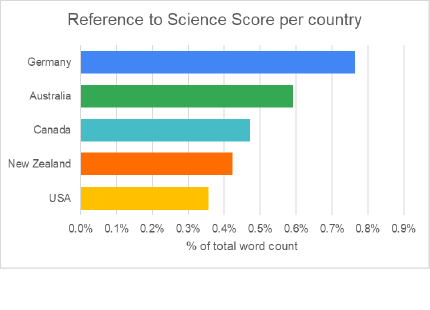 Merkel, maybe predictably as a trained scientist, most frequently demonstrated that she involved experts and science in her decision-making through her public statements. She famously warned the German public in her first COVID-19 press conference in early March that up to 70 percent of people may contract the virus. However, despite her detailed scientific explanations, she did not set out what changes to expect or direct people to take social distancing or other measures. 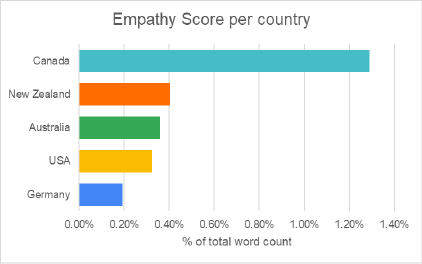 Trudeau—not female leaders Ardern and Merkel—scored highest on empathy, repeatedly reassuring listeners: “I know that people are worried about what they’re seeing on the nightly news and what it means for their community. We get it. And we’re on it.” In contrast, Ardern, despite her viral clip saying, “we do consider both the Tooth Fairy and the Easter Bunny to be essential workers,” scores significantly lower on empathy. Instead, she focused on facts and clear statements. While Trudeau emphasized the anxiety that people might feel, Prime Minister Ardern gave clear instructions (“We ask people to stay two meters apart from anyone you pass.”).

While science-focused Merkel and empathetic Trudeau fared better than their neighbors France and the U.S., both rank below the median for fewest COVID-19 deaths, and far below top communicators Morrison and Ardern. Of course, there are still other factors to account for such as health infrastructure. However, the fact that President Trump consistently ranked last or second to last on all traits might play a role in the U.S.’ high number of COVID-19 deaths despite ranking number one on the Global Health Security Index.

What can we take away from this?

Skills, not gender stereotypes, may be the best prediction of how leaders perform in a crisis. While some male leaders displayed more empathy than female leaders, ultimately individuals who exercised caution and communicated with clarity—traits that do not strongly correspond with gender—prevented more COVID-19 deaths than more empathetic heads of state.

But then how do we explain the coronavirus gender gap? Because women leaders must break through so many more barriers to reach positions of leadership, they have likely learned the skills of clear communication and decisive action better than many of their male counterparts. The good news is that this implies that these two skills can be acquired, irrespective of gender.

The final verdict on leadership in the evolving pandemic has yet to be written and these research methods were limited to a subset of countries. But the findings challenge gender stereotypes and show that leadership is a skill that can be learned. If women represented more than a mere 8% of world leaders, we might understand this phenomenon better. For now, all leaders would do well to take some words from the wise: wear a mask and stay six feet apart.

Izzy Ernst is currently in her final year of pursuing a joint Master of Business Administration (MBA) and Master of Public Administration (MPA) at Stanford Graduate School of Business and Harvard Kennedy School. Izzy started her career as a management consultant at McKinsey & Company. During the European refugee crisis in 2015/16 she moved back to her hometown Berlin to support the state government as Chief of Staff to the Berlin State Office for Social Affairs and Health in its efforts to accommodate and integrate 60,000 newcomer refugees. She later joined the International Rescue Committee as Senior Advisor to the Senior Vice President for Europe.

Grace Pringle is a Foreign Affairs Officer at the U.S. Department of State and a recent Master in Public Policy graduate of Harvard Kennedy School. At HKS, she worked as a course coach for Amb. Samantha Power, Amb. Wendy Sherman, Dr. Ronald Heifetz, and Dr. Kimberlyn Leary, and as a Summer Defense Fellow in the Office of Senator Elizabeth Warren. Before HKS, Grace worked for UNICEF Sudan advocating with parties to armed conflict to end the recruitment and use of children, and for the UK Mission to the UN negotiating General Assembly and Security Council resolutions on human rights, peacekeeping, atrocity prevention, and Africa. She holds a Bachelors in Public Health and Global Poverty and Practice from the University of California-Berkeley.

1 Outbreak is defined as when deaths per million hit 0.1. Unlike twostudies that supported the same finding, we standardized the data to the first five months relative to each country’s date of outbreak. This is an important distinction because COVID-19 arrived in each country at different times. While coronavirus aggressively hit South Korea, Iran, and Italy in late February, the disease did not reach Angola or Nepal until late May. COVID-19 health outcomes were measured by total deaths per million as opposed to absolute numbers to account for population size.

4 The difference between observed deaths in 2020 compared with past averages, measured using the Financial Times dataset for a subset of countries in the first two months of the pandemic.

7 Three key press conferences around the lockdown date of each country (or closest proxy) were selected. By measuring each character trait through particular keywords, phrases, and sentiments, such as the number of times statistics were cited, or clear instructions were given, we ranked each head of state according to each trait.

For more information on this publication: Belfer Communications Office
For Academic Citation: Ernst, Izzy and Grace Pringle. “What We Can Learn From the Wonder Women of COVID-19.” Policy Brief, November 2020.