The P5+1 negotiations with Iran have resumed in New York for its final stretch to reach a comprehensive solution by the 24 November 2014 deadline. Those negotiations should include talks on Iran’s ballistic missile capability.

The UN Security Council Resolution 1929 requested, inter alia, that Iran shall not undertake any activity related to ballistic missiles capable of delivering nuclear weapons. The same resolution reaffirmed that Iran shall cooperate fully with the IAEA on all outstanding issues, particularly those which give rise to concerns about the possible military dimensions (PMD) of the Iranian nuclear program. This also included provision of IAEA access without delay to all sites, equipment, persons, and documents requested by the IAEA, and stressed the importance of ensuring that the IAEA have all necessary resources and authority for the fulfillment of its work in Iran. 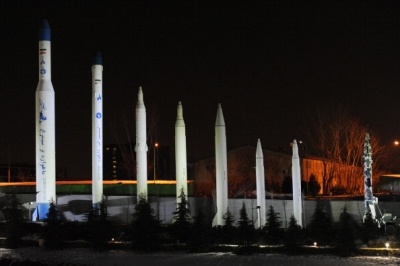 February 6, 2014 - Full-size replicas of each of Iran's space rockets and ballistic missiles are displayed at night on the grounds of the Museum of Holy Defense and Spreading the Culture of Resistance in Tehran. (Scott Peterson/Getty Images)

One of the questions raised with the PMD is the design of a re-entry vehicle for a ballistic missile. The IAEA report from November 2011describes work – known as Project 111 – on engineering studies to examine how to integrate a new spherical payload into the existing payload chamber, which would be mounted in the re-entry vehicle of the Shahab-3 missile. The IAEA has assessed that the payload in question – with the size, fusing, arming, and firing mechanisms – is likely a nuclear device.

In the light of these findings, it should be expected that resolving questions relating to the PMD issues that also include addressing verifiable limits to Iran's ballistic missile capabilities should form part of a comprehensive nuclear agreement.

A defendable agreement that rolls-back Iran’s clandestine nuclear infrastructure should also tackle Iran’s nuclear weapon delivery systems. The agreement should seek to suspend Iran’s ballistic missile related work and/or impose a moratorium on the testing of all ballistic missiles, with verifiable ends.

Ignoring the strategic linkage between Iran’s nuclear program and its missile program weakens any monitoring and verification system, undermines regional stability and security, and disregards both UN Security Council Resolution 1929 and the sanctions termination criteria as stipulated in U.S. law. It furthermore risks putting all the eggs to one basket – nuclear safeguards and monitoring – while effectively decoupling verification work from a more complex nuclear picture in Iran.