"Abandoning 'Legitimacy': Reflections on Syria and Yemen" with Lisa Wedeen 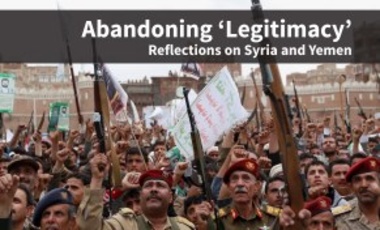 AP Images
Shiite rebels, known as Houthis, hold up their weapons to protest against Saudi-led airstrikes, during a rally in Sanaa, Yemen.

Lisa Wedeen will discuss the uprising against the Syrian regime that began in 2011 and, in doing so, will question the usefulness of the concept of legitimacy in trying to analyze and understand authoritarian, or even democratic, regimes. Reflecting on the seductions and weaknesses of Syria’s neoliberal autocracy in particular, the presentation will chart its unmaking—including the ascendance of the Islamic state and the sowing of sectarian dissension. In focusing on both domestic and international dynamics, reference will also be made to recent events in Yemen.

Please note: Registration for this event has closed. You will have received a separate email confirming your seat if you already registered for the event. If you are still interested in the event, please email chris_mawhorter@hks.harvard.edu by Tuesday afternoon (4/14).

Study Group participants are encouraged to buy or loan the following book. This seminar will focus on topics covered in Chapter 4 of the book:

Additional Readings: to be determined.

Lisa Wedeen is the Mary R. Morton Professor of Political Science and the College and the Co-Director of the Chicago Center for Contemporary Theory at the University of Chicago. Her publications include Ambiguities of Domination: Politics, Rhetoric, and Symbols in Contemporary Syria (1999); "Conceptualizing 'Culture': Possibilities for Political Science" (2002); "Concepts and Commitments in the Study of Democracy" (2004), Peripheral Visions: Publics, Power and Performance in Yemen (2008), "Ethnography as an Interpretive Enterprise" (2009), "Reflections on Ethnographic Work in Political Science" (2010), and "Ideology and Humor in Dark Times: Notes from Syria" (2013). She is the recipient of the David Collier Mid-Career Achievement Award and an NSF fellowship. She is currently working on a book about ideology, neoliberal autocracy, and generational change in present-day Syria.