Ambassador Thomas Pickering and Geoffrey Aronson: "U.S. Policy in a Time of Transition" 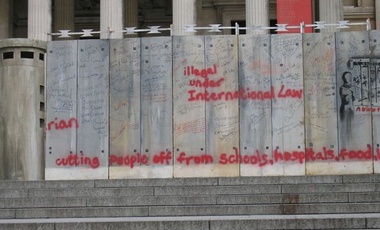 Pickering entered on active duty in the U.S. Navy from 1956-1959, and later served in the Naval Reserve to the grade of Lieutenant Commander. Between 1959 and 1961, he was assigned to the Bureau of Intelligence and Research of the State Department and later to the Arms Control and Disarmament Agency. From 1962 to 1964 Pickering served in Geneva as political adviser to the U.S. Delegation to the 18-Nation Disarmament Conference.

In 1996, Pickering was awarded the Department of State’s highest award – the Distinguished Service Award - and he holds the personal rank of Career Ambassador, the highest in the U.S. Foreign Service.

Geoffrey Aronson is the Director of Research and Publications at the Foundation for Middle East Peace in Washington, DC. He is the Editor of the Foundation's bimonthly Report on Israeli Settlements in the Occupied Territories.

Aronson is the author of From Sideshow to Center Stage: US Policy towards Egypt and Israel, Palestinians, and the Occupied Territories: Creating Facts in the West Bank. He has written numerous newspaper, magazine and journal articles on Middle Eastern affairs and he writes regularly in the US for the Los Angeles Times, SF Chronicle and Christian Science Monitor, for the Arab world in Al-Hayat and Al-Wasat, and for Europe in Le Monde Diplomatique. Aronson appears frequently at symposia on a wide range of Middle East related issues and has consulted for both the World Bank and UN, and testified before the House of Representatives Subcommittee on Foreign Operations in 1992 on Israeli settlement activity in the West Bank and Gaza Strip.

Aronson graduated from Tufts University with a BA in Political Science and International Relations and obtained a M.LITT. in Modern Middle Eastern History from St. Antony's College, Oxford University, in 1984. He obtained the Ella Lyman Cabot Trust writing grant in 1982 and was a visiting scholar at the Center for Contemporary Arab Studies, Georgetown University, in 1984. Between 1985-1987, he was a visiting fellow at the Institute for Policy Studies and was awarded grants from the Fund for Investigative Journalism in 1986 and 1991.

Aronson has traveled extensively throughout the Arab world and Iran, and speaks Hebrew and French.

Co-sponsored by the Center for Middle Eastern Studies and the Weatherhead Center for International Affairs.

Please note this event is off the record. The use of recording devices is strictly prohibited.