A seminar with Christopher Phillips, Senior Lecturer in the International Relations of the Middle East at Queen Mary, University of London and an Associate Fellow at the Chatham House Middle East and North Africa programme on his latest book The Battle for Syria: International Rivalry in the New Middle East. Moderated by Stephen Walt, Robert and Renee Belfer Professor of International Affairs, HKS. 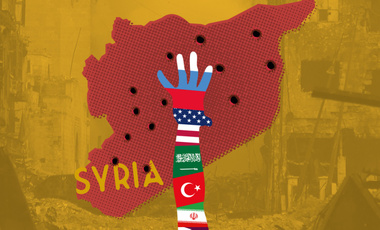 A seminar with Christopher Phillips, Senior Lecturer in the International Relations of the Middle East at Queen Mary, University of London and an Associate Fellow at the Chatham House Middle East and North Africa programme on his latest book The Battle for Syria: International Rivalry in the New Middle East.

The Syrian civil war has been one of the most far reaching conflicts of the 21st century. As well as causing over half a million deaths and 12 million refugees or displaced, it has raised some major questions about the geopolitical order of the Middle East. Does Russian intervention in the conflict mark an end to western dominance of the region? Could and should the United States have done more? Using research from his new book, Dr Christopher Phillips explores the international relations of the Syria crisis, arguing that the war is both the by-product and the accelerator of the Middle East’s changing international order.

"Most accounts of Syria’s brutal, long-lasting civil war focus on a domestic contest that began in 2011 and only later drew foreign nations into the escalating violence. Christopher Phillips argues instead that the international dimension was never secondary but that Syria’s war was, from the very start, profoundly influenced by regional factors, particularly the vacuum created by a perceived decline of U.S. power in the Middle East. This precipitated a new regional order in which six external protagonists—the United States, Russia, Iran, Saudi Arabia, Turkey, and Qatar—have violently competed for influence, with Syria a key battleground.

Drawing on a plethora of original interviews, Phillips constructs a new narrative of Syria’s war. Without absolving the brutal Bashar al-Assad regime, the author untangles the key external factors which explain the acceleration and endurance of the conflict, including the West’s strategy against ISIS. He concludes with some insights on Syria and the region's future."

For more information, see the book at Yale University Press.

Christopher Phillips is Senior Lecturer in the International Relations of the Middle East at Queen Mary, University of London and an Associate Fellow at the Chatham House Middle East and North Africa programme. He has a PhD in International Relations from the London School of Economics, and was previously the deputy editor for Syria and Jordan at the Economist Intelligence Unit. He lived for several years in Syria and conducts frequent research trips to the US, Jordan, Turkey, Lebanon and the Gulf. He regularly consults UK and foreign government agencies and NGOS, and has appeared on BBC Newsnight, BBC Radio 4’s Today Programme, BBC News, Al-Jazeera, Sky News, Bloomberg and Channel 4 News. He has published academic articles in International Affairs, Third World Quarterly, Nations and Nationalism and Mediterranean Politics and op-eds in The Guardian, Newsweek, CNN, The Huffington Post and Prospect among others. His first book, Everyday Arab Identity: the daily reproduction of the Arab World was published by Routledge in 2012. His new book, The Battle for Syria: International Rivalry in the New Middle East, was published by Yale University Press in September 2016.