"The Ethics, Politics, and Strategy of Israel's War in Gaza" with Dov Waxman

A seminar with Dov Waxman, Professor of Political Science, International Affairs, and Israel Studies and co-director of the Middle East Center at Northeastern University. 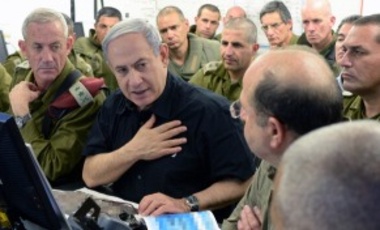 Getty Images
Israeli Prime Minister Benjamin Netanyahu (C), and IDF Chief of Staff Benny Gantz (L) visit a tactical headquarters of the IDF in southern Israel near the border with Gaza on July 21, 2014.

A seminar with Dov Waxman, Professor of Political Science, International Affairs, and Israel Studies and co-director of the Middle East Center at Northeastern University.

Originally from London, England, Dov Waxman attended Oxford University as an undergraduate studying Politics, Philosophy and Economics, before moving to the United States for his graduate studies at Johns Hopkins University’s School of Advanced International Studies (SAIS) in Washington DC where he received his M.A. and Ph.D. degrees. While in Washington DC, he also worked as a researcher at the Center for Strategic and International Studies.

He is the author of The Pursuit of Peace and the Crisis of Israeli Identity: Defending / Defining the Nation (Palgrave Macmillan, 2006), and the coauthor (with Ilan Peleg) of Israel’s Palestinians: The Conflict Within (Cambridge University Press, 2011). He has published over 50 scholarly and popular articles and is a frequent commentator on Middle East affairs on television and radio.