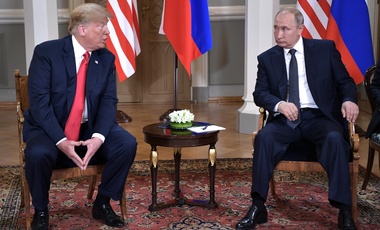 Wikimedia Commons
Donald Trump and Vladimir Putin in Helsinki in July 2018.
About
Speakers

Click here to view a recording of this session.

The existing global political-economic order has been ruptured by the rise of China, a broad backlash against globalization, uncertainties about the U.S. commitment to a rules-based system, and most recently, the Covid19 pandemic. What form(s) might a future world order take, and what principles should guide efforts to construct it?

Arrangements designed to reduce the danger from weapons of mass destruction (WMD) will be a critical part of any future world order.  The participants in this online webinar will discuss and respond to a recent paper on the future world order by Dani Rodrik and Stephen Walt (available here) and consider whether the framework presented in the paper could be used to guide future arms control efforts.  In particular, the discussion will address questions such as these:

1. Could the major powers agree to ban or severely restrict certain types of armaments, in order to stabilize political relations and reduce the risk of war?

2. What are the prospects for formal or informal agreements based on mutual adjustments, in which different states agree to limit certain activities in exchange for parallel concessions by others?

3. If outright bans and/or mutual adjustments cannot be reached, could states nonetheless decide to limit their own efforts to increase or modernize existing arsenals unilaterally, so as to avoid costly or dangerous arms races?

4. What areas of arms control will require a multilateral approach, as opposed to purely bilateral treaties or unilateral acts of restraint?

Emma Belcher is President of Ploughshares Fund.  She was previously Director of the Nuclear Challenges Program at the John D. and Catherine T. Macarthur Foundation and is a former Stanton Nuclear Fellow at the Council on Foreign Relations.

Matthew Bunn is the James R. Schlesinger Professor of the Practice of Energy, National Security, and Foreign Policy at the Harvard Kennedy School, and Faculty Chair of the Belfer Center’s Project on Managing the Atom.

Stephen Walt is the Robert and Renée Belfer Professor of International Affairs and Faculty Chair of the Belfer Center’s International Security Program.