Hal Brands — The Twilight Struggle: What the Cold War Teaches Us about Great-Power Rivalry Today

As the United States faces alignment between a violently resurgent Russia and a full-spectrum competitor in China, join the Belfer Center's Applied History Project for an open session of our Applied History Working Group. Its members—distinguished historians and public servants—study the past to illuminate the most pressing challenges we face today. 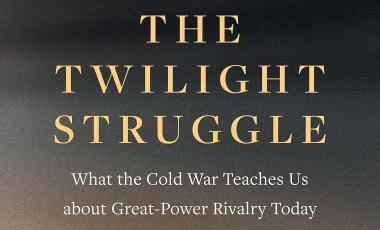 For this session, the Applied History Working Group is delighted to welcome Hal Brands, the Henry A. Kissinger Distinguished Professor of Global Affairs at the Johns Hopkins School of Advanced International Studies. Brands, in conversation with Graham T. Allison, will discuss his new book The Twilight Struggle: What the Cold War Teaches Us about Great-Power Rivalry Today, which looks to the 20th century for lessons in how America can succeed in modern great-power competition.

All are welcome to attend; register using the RSVP link above.

Hal Brands is the Henry A. Kissinger Distinguished Professor of Global Affairs at the Johns Hopkins School of Advanced International Studies (SAIS) and a scholar at the American Enterprise Institute. He is also a columnist for Bloomberg Opinion. He is the author or editor of several books, most recently The Twilight Struggle: What the Cold War Teaches Us about Great-Power Rivalry Today (2022). His other recent books include The Lessons of Tragedy: Statecraft and World Order, co-authored with Charles Edel, and COVID-19 and World Order, co-edited with Francis Gavin. Hal served as Special Assistant to the Secretary of Defense for Strategic Planning from 2015 to 2016. He has also served as lead writer for the Commission on the National Defense Strategy for the United States, and consulted with a range of government offices and agencies in the intelligence and national security communities.

Yale University Press on The Twilight Struggle: What the Cold War Teaches Us about Great-Power Rivalry Today:

"The United States is entering an era of great-power competition with China and Russia. Such global struggles happen in a geopolitical twilight, between the sunshine of peace and the darkness of war. In this innovative and illuminating book, Hal Brands, a leading historian and former Pentagon adviser, argues that America should look to the history of the Cold War for lessons in how to succeed in great-power rivalry today. Although the threat posed by authoritarian powers is growing, America’s muscle memory for dealing with dangerous foes has atrophied in the thirty years since the Cold War ended. In long-term competitions where the diplomatic jockeying is intense and the threat of violence is omnipresent, the United States will need all the historical insight it can get. Exploring how America won a previous twilight struggle is the starting point for determining how America can successfully prosecute another high-stakes rivalry today."

Praise for The Twilight Struggle: What the Cold War Teaches Us about Great-Power Rivalry Today:

"Good strategy starts with an understanding of history. And no one has thought harder about the lessons of the past than Hal Brands. If you want to know how America can win today's rivalries with Russia and China, read this book about how it triumphed in another twilight struggle: the Cold War."— Stephen J. Hadley, national security adviser to President George W. Bush

"A masterful account of the Cold War, the perils along the way, and the elements of the U.S.-led western strategy that won that war without ever firing a shot and a superb distillation of the lessons that the always-impressive Brands takes from that struggle as we enter a similar era of renewed great-power rivalries. This is a must-read for those seeking to illuminate the way forward with insights gleaned from the past."—General David Petraeus, US Army (Ret.), former Commander of the Surge in Iraq, US Central Command, and Coalition/US Forces in Afghanistan and former Director of the CIA