Health System Resilience amidst Political Instability: the Case of Lebanon 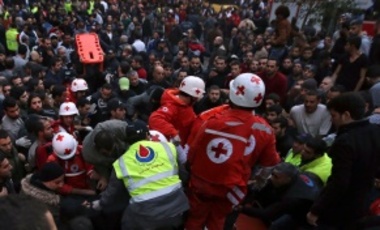 AP Images
Lebanese Red Cross members try to pull a body from a car at the site of an explosion in a stronghold of the Shiite Hezbollah group at the southern suburb of Beirut, Lebanon.

The Lebanese experience, notably with the recent challenging Syrian crisis, defies certain well-established concepts in the discipline of public health. The speaker contests the globalization of the corresponding paradigms as they overlook important contextual factors and innovations in governance, particularly in the context of political instability.

Professor Walid Ammar has been the Director General of the Ministry of Public Health (MOPH) of Lebanon since 1993. Under his leadership, reform efforts led to significant improvement in health indicators while decreasing the GDP share of health expenditures mostly as a result of a meaningful reduction in households’ out-of-pocket spending.  Prof. Ammar established the Primary Health Care Network in Lebanon and developed the National Nursing Training Program in 1997. He lobbied for the public hospitals’ autonomy Law, issued in 1996, and has been leading the Hospital Accreditation Program since 1999. He recently introduced a set of hospital performance indicators making performance contracting a well established practice in the MOPH.

Dr. Ammar is Professor at the Lebanese University, and Senior Lecturer at the American University of Beirut (AUB). He chairs several National Committees and was appointed in 2011 Commissioner in the United Nations Commission on Information & Accountability for Women & Children’s Health. He chaired Committee A of the 64th World Health Assembly and served as a member of the Executive Board (EB) at the World Health Organization (2012-2015).

He has many publications including two published books: “Health System And Reform in Lebanon” (2003), “Health Beyond Politics” (2009).

Co-sponsored by the Harvard Center for Middle Eastern Studies.