The Korean War at 70: Revisiting the Role of Intelligence

The Harvard Korea Project acknowledges the generous support of the Korea Foundation. 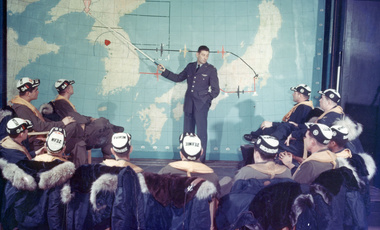 U.S. Air Force photo
Maj. Harry Bailey points out the often-visited target of Sinuiju, North Korea. On the right of the map is a red dot that represents their starting point, Yokota Air Base near Tokyo, Japan.

Lt. Gen. (ret.) Karen Gibson, Panel Speaker
Throughout her 33-year career as an Army intelligence officer, Lieutenant General Karen Gibson served in a variety of assignments in the United States, Middle East, Afghanistan, Africa, and Asia, to include four years in the Republic of Korea. Lt. Gen. Gibson retired in March 2020 while serving as Deputy Director for National Security Partnerships at the Office of the Director of National Intelligence. She commanded at the company, battalion, and brigade levels and served as the J2 or Director of Intelligence at U.S. Central Command, Combined Joint Task Force Operation Inherent Resolve, and Combined Joint Task Force Horn of Africa. Lt. Gen. Gibson hails from Bozeman, Montana and holds a Bachelor of Science in Industrial Engineering from Purdue University, a Master of Science in Strategic Intelligence from the National Intelligence University, and a Master of Science in National Security Strategy from the National Defense University. She is a Distinguished Graduate of the National War College and is currently enrolled in Harvard Business School’s Credential of Readiness Program.

Blaine Harden, Panel Speaker
Mr. Blaine Harden is a journalist and author of six books, three about the Korean Peninsula (including King of Spies: The Dark Reign of America’s Spymaster in Korea), one about Africa, and two about the history of the Pacific Northwest, where he was born and raised. He attended Gonzaga and Syracuse Universities before spending most of his career as a foreign correspondent for the Washington Post, serving as bureau chief in Northeast Asia, Eastern Europe, and Africa. He was also a national correspondent for the New York Times and a writer for the New York Times Magazine, as well as a reporter for PBS Frontline and a contributor to The Economist. Mr. Harden wrote Escape from Camp 14 (2012), an international bestseller published in 28 languages. Among his journalism honors is the Ernie Pyle award for coverage of the siege of Sarajevo.

Andrew Kim, Opening Remarks
Mr. Andrew Kim retired in November 2018 as a Senior Intelligence Officer from the Central Intelligence Agency (CIA) after 28 years of service. His last position was Assistant Director of CIA for the Korea Mission Center. He established the Korea Mission Center in April 2017 in direct response to a Presidential initiative to defuse North Korea’s longstanding threat to global security. He also managed and guided CIA analysts who have unique and extensive expertise on Korea to provide strategic and tactical analytic products for a range of policymakers. He successfully negotiated the foundation for the U.S.-North Korea Summit in Singapore in June 2018 – a diplomatic initiative aimed at resolving seven decades of conflict on the Korean Peninsula. Mr. Kim also held the Associate Deputy Director of CIA for Operations/Technology position. In this capacity, he led and orchestrated all efforts to update their operational technology and incorporated state-of-the-art doctrine into CIA training curricula. Mr. Kim, who served as the Chief of CIA Station in three major East Asian cities, managed the collection, analysis, production, and distribution of information that directly affected national security. In recognition of his many contributions, CIA honored Mr. Kim with the Director’s Award (2018), Presidential Rank Award (2012), and the Donovan Award (1990).

Paul Kolbe, Welcoming Remarks
Mr. Paul Kolbe is the Director of the Intelligence Project at the Harvard Kennedy School’s Belfer Center. He served for 25 years in the CIA’s Directorate of Operations in a variety of foreign and domestic roles, including as Chief of Station, Chief/Central Eurasia Division, and Balkans Group Chief. His overseas assignments included operational and leadership roles in the former Soviet Union, the Balkans, Southeast Asia, Southern Africa, and Central Europe. He was a member of the Senior Intelligence Service and is a recipient of the Intelligence Medal of Merit and the Distinguished Career Intelligence Medal. Following his CIA career, Mr. Kolbe was Director for Intelligence and Analysis at BP, where he built an enterprise-wide intelligence capability focused on geo-political threats, strategic cyber threats, and support to commercial operations. Clients included C-suite leadership, global business units, security networks, and legal teams. Mr. Kolbe is a Senior Advisor to the Crumpton Group, Capstone Global, and Spycraft Entertainment. He is also a member of the Cipher Brief network of experts and is an alumnus of Michigan State University’s James Madison College, where he studied International Relations.

Dr. John Park, Moderator
Dr. John Park is Director of the Korea Project at the Harvard Kennedy School’s Belfer Center. He is also a Faculty Member of the Committee on Regional Studies East Asia at Harvard’s Graduate School of Arts and Sciences and a Faculty Affiliate with the Project on Managing the Atom at the Harvard Kennedy School. His current research projects focus on nuclear proliferation, economic statecraft, Asian trade negotiations, and North Korean cyber activities. Dr. Park has testified on North Korea before the Senate Banking Committee and the House Financial Services Committee. He previously directed Asia Track 1.5 projects at the U.S. Institute of Peace. He earlier worked at Goldman Sachs and The Boston Consulting Group. His publications include: “Stopping North Korea, Inc.: Sanctions Effectiveness and Unintended Consequences,” (MIT Security Studies Program, 2016 – co-authored with Jim Walsh); and “Assessing the Role of Security Assurances in Dealing with North Korea” in Security Assurances and Nuclear Nonproliferation (Stanford University Press, 2012). Dr. Park received an M.Phil. and a Ph.D. from the University of Cambridge. He completed his predoctoral and postdoctoral training at the Harvard Kennedy School.

Dr. Kathryn Weathersby, Panel Speaker
Dr. Kathryn Weathersby is Adjunct Professor of Asian Studies at the Edmund A. Walsh School of Foreign Service at Georgetown University in Washington, D.C., and Deputy Director of the Korean War Archive at Korea University in Seoul. She holds a Ph.D. in Modern Russian history, with a second field in Modern East Asia, from Indiana University. Following the collapse of communist rule in the Soviet Union, she did pioneering research in Russian archives on the creation of the North Korean state and the Korean War. Her publications include “North Korea and the Armistice Negotiations,” Transactions of the Royal Asiatic Society Korea Branch (Seoul, 2016) and “The Soviet Role in the Korean War: The State of Historical Knowledge,” in William Stueck, ed., The Korean War in World History (Lexington: The University of Kentucky Press, 2004). While at the Woodrow Wilson Center for International Scholars in Washington, D.C., Dr. Weathersby founded and coordinated the Korea Initiative of the Cold War International History Project and the North Korea International Documentation Project. She has taught courses on North Korea and the Korean War at the U.S.-Korea Institute of the School of Advanced International Studies of The Johns Hopkins University in Washington, D.C., and at Korea University in Seoul. In 2014, the Ministry of Patriots and Veterans Affairs of the Republic of Korea honored her work on the Korean War by awarding her the Civilian Order of Merit.