Lessons from the Tunisian Transition: Challenges and Imperatives

THIS SESSION HAS BEEN MOVED TO WIENER AUDITORIUM on the ground floor of the Taubman Building.

A seminar with Professor Ghazi Gherairi, Secretary General of the International Academy of Constitutional Law. Second session of the fall 2015 study group led by MEI Visiting Scholar Hedi Larbi, Rewriting the Arab Social Contract: Toward Inclusive Development and Politics in the Arab World. 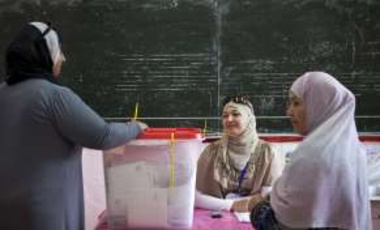 THIS SESSION HAS BEEN MOVED TO WIENER AUDITORIUM on the ground floor of the Taubman Building.

A seminar with Professor Ghazi Gherairi, Secretary General of the International Academy of Constitutional Law. Second session of the fall 2015 study group led by MEI Visiting Scholar Hedi Larbi, Rewriting the Arab Social Contract: Toward Inclusive Development and Politics in the Arab World.

Please note this session will be presented in French with simultaneous translation into English.

Since late 2010, the Tunisian people have embarked on one of the most exciting human endeavors since the beginning of this third millennium.

Indeed, the people have decided to put an end to a long history of alienation and authoritarianism. They have stood up peacefully but firmly against the existing regime and demanded freedom, dignity, and social justice.

After four long years of tumultuous, yet peaceful and civil transition, Tunisia, the cradle of the Arab Spring, is the only country that completed the first Arab democratic transition. From 2011 to 2014, three democratic elections were held resulting in three peaceful transfers of power. A new constitution enshrining fundamental rights and a democratic power-sharing system has been adopted through a democratic process.

However, in spite of this undeniable achievement, the Tunisian democratization experience is not yet fully complete. The consolidation process that started in early 2015 will face major challenges. Indeed, in addition to setting up the institutions provided for by the constitution to oversee the consolidation process and create the necessary checks and balances to promote and sustain the nascent democracy, the country has to meet the long awaited demands of the people, especially in lagging regions, for the social and economic improvements for which they rebelled.

Moreover, Tunisia has to face an unprecedented regional and geopolitical environment fraught with instability and terrorism, inside and outside its borders. The recent terrorist attacks of the Bardo Museum and a tourist resort in Sousse, and the perverseness of some regional state or non-state actors to thwart any attempt of democratization in the region, testify to the gravity of the threat Tunisia now confronts.

In this presentation I will attempt to shed light on the Tunisian experience by addressing the following questions:

First, why Tunisia is the only Arab Spring country that has successfully completed its transition?

Second, Can the Tunisian experience be considered as a model, and if not, what can we learn from it?

And finally, given the many endogenous and exogenous challenges Tunisia is facing what is the prospect for this nascent democracy to consolidate and grow?

Pr. Ghazi Gherairi is a lecturer-researcher in public law and political science at The University of Carthage, he also teaches at l'institut diplomatique de Tunis and at  Tunis School of politics. He is also: