A public address by Pierre Krähenbühl, Commissioner General, United Nations Relief and Works Agency for Palestine Refugees in the Near East (UNRWA). 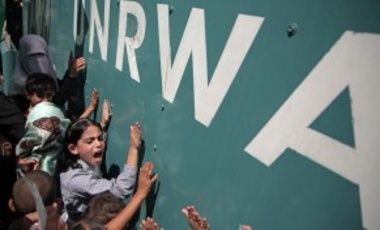 AP Photo/ Khalil Hamra
A Palestinian school girl chants slogans during a demonstration against a U.N. Relief and Works Agency (UNRWA) funding gap that could keep about 500,000 Palestinian students out of school this fall, outside the UNRWA Gaza Headquarters in Gaza City.

A public address by Pierre Krähenbühl, Commissioner General, United Nations Relief and Works Agency for Palestine Refugees in the Near East (UNRWA).

A Swiss national born in 1966, Mr. Krähenbühl has 25 years of experience in humanitarian, human rights and development work.

Prior to joining UNRWA, he served as Director of Operations at the International Committee of the Red Cross from July 2002 to January 2014, responsible for the conduct, management and supervision of 12,000 ICRC staff working in 80 countries. In this position, he directly oversaw that organization’s response to conflicts in Afghanistan, Iraq, Syria, Colombia and Libya, among others. He led senior-level negotiations with a range of governments, armed forces and other groups to secure access to conflict-affected populations.

Mr. Krähenbühl’s experience also includes diverse and demanding field assignments in places experiencing profound social change and armed conflict, including El Salvador, Peru and Bosnia and Herzegovina. The father of three boys, he holds a BA in Political Sciences and International Relations from the University of Geneva.

On assuming the post of UNRWA Commissioner-General, Mr. Krähenbühl said: “The momentous events across the region are having a profound impact on the lives of UNRWA beneficiaries who are facing one of the most serious protection crises in their history. This presents a challenge which I shall embrace with determination, realism and humility."