Security States, Failed States, Islamic States: The Causes and Consequences of the Crisis of Arab Statehood 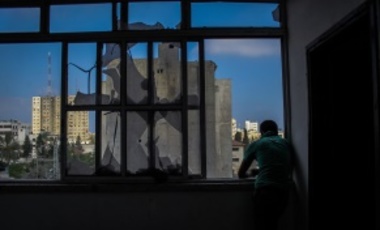 AP Images
Palestinian teenager looks out the window of a home destroyed by the Israeli Air Force in Gaza City.

The speaker will discuss the core, enduring crisis of rickety and unvalidated statehood in the Arab world, whose latest symptom is the "Islamic State" that existing Arab states seem unable or unwilling to confront. The underlying drivers of violence, refugees and other stresses in the region are likely to increase rapidly in view of declining oil prices. How did we get here, and what do we have to do to get out of here?

Rami George Khouri is an internationally syndicated political columnist and book author. He was the first director, and is now a senior fellow, at the Issam Fares Institute for Public Policy and International Affairs at the American University of Beirut. He also serves as a nonresident senior fellow at the Kennedy School of Harvard University. He is editor at large, and former executive editor, of the Beirut-based Daily Star newspaper, and was awarded the Pax Christi International Peace Prize for 2006.

He was editor-in-chief of the Jordan Times for seven years and for 18 years was general manager of Al Kutba, Publishers, in Amman, Jordan, where he also served as a consultant to the Jordanian tourism ministry on biblical archaeological sites. He has hosted programs on archaeology, history and current public affairs on Jordan Television and Radio Jordan, and often comments on Mideast issues in the international media.

He has BA and MSc degrees respectively in political science and mass communications from Syracuse University, NY, USA.