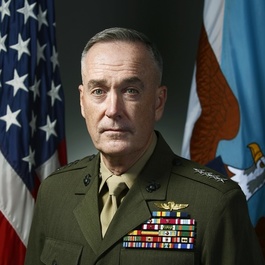 Before joining the Belfer Center, General Dunford served as the 19th Chairman of the Joint Chiefs of Staff, the nation’s highest-ranking military officer, and the principal military advisor to the President, Secretary of Defense, and National Security Council (Oct. 1, 2015 - Sept. 30, 2019).

A native of Boston, General Dunford graduated from Saint Michael's College and was commissioned in 1977. He has served as an infantry officer at all levels, including command of 2nd Battalion, 6th Marines, and command of the 5th Marine Regiment during Operation IRAQI FREEDOM.

His Joint assignments included duty as the Executive Assistant to the Vice Chairman of the Joint Chiefs of Staff, Chief of the Global and Multilateral Affairs Division (J-5), and Vice Director for Operations on the Joint Staff (J-3).

A graduate of the U.S. Army Ranger School, Marine Corps Amphibious Warfare School, and the U.S. Army War College, General Dunford also earned masters degrees in Government from Georgetown University and in International Relations from the Fletcher School of Law and Diplomacy.