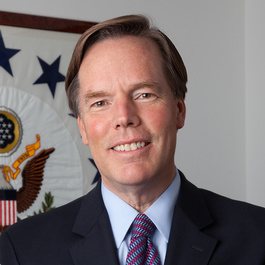 Ambassador Nicholas Burns is on public service leave from the Harvard Kennedy School as of December 21, 2021 to serve as the U.S. Ambassador to the People's Republic of China.

Ambassador Nicholas Burns is the Roy and Barbara Goodman Family Professor of the Practice of Diplomacy and International Relations at the Harvard Kennedy School. He is the Founder and Faculty Chair of the Future of Diplomacy Project and Faculty Chair of the Project on Europe and the Transatlantic Relationship. He serves on the Board of Directors of the Kennedy School’s Belfer Center for Science and International Affairs, is a Faculty Affiliate of the Middle East Initiative, and a Faculty Associate at Harvard’s Weatherhead Center for International Affairs.

Burns is Executive Director of the Aspen Strategy Group and Aspen Security Forum, Senior Counselor at the Cohen Group, and serves on the Board of Directors of Entegris, Inc. He is Chairman of the Board of Our Generation Speaks, which seeks to bring together young Palestinians and Israelis in common purpose. He is Chairman of the American Ditchley Foundation and serves on the Board of Trustees of Boston College. He also serves on the boards of several non-profit organizations, including Special Olympics International, the American School of Classical Studies in Athens, the Center for the Study of the Presidency and Congress, Refugees International, The Trilateral Commission, the Richard C. Lounsbery Foundation, the Atlantic Council, America Abroad Media, the Association of Diplomatic Studies and Training, the Appeal of Conscience Foundation, the Boston Committee on Foreign Relations, the Gennadius Library, the NATO Cyber Center of Excellence, and the Foreign Policy Association’s Great Decisions Television Advisory Board. He serves on the Panel of Senior Advisors at Chatham House: the Royal Institute of International Affairs. He is a member of the Committee on Conscience of the United States Holocaust Memorial Museum, the American Academy of Arts and Sciences, and the Council on Foreign Relations. He is also a Fellow of the Massachusetts Historical Society. He is a life-long member of Red Sox Nation.

Professor Burns served in the United States government for twenty-seven years.  As a career Foreign Service Officer, he was Under Secretary of State for Political Affairs from 2005 to 2008; the State Department’s third-ranking official when he led negotiations on the U.S.–India Civil Nuclear Agreement; a long-term military assistance agreement with Israel; and was the lead U.S. negotiator on Iran’s nuclear program. He was U.S. Ambassador to NATO (2001-2005), Ambassador to Greece (1997-2001) and State Department Spokesman (1995-1997).  He worked for five years (1990–1995) on the National Security Council at the White House where he was Senior Director for Russia, Ukraine and Eurasia Affairs and Special Assistant to President Clinton and Director for Soviet Affairs in the Administration of President George H.W. Bush. Professor Burns also served in the American Consulate General in Jerusalem (1985-1987) where he coordinated U.S. economic assistance to the Palestinian people in the West Bank and before that, at the American embassies in Egypt (1983-1985) and Mauritania (1980 as an intern). He was a member of Secretary of State John Kerry’s Foreign Affairs Policy Board (2014-2017).

Professor Burns has received fifteen honorary degrees, the Presidential Distinguished Service Award, the Secretary of State’s Distinguished Service Award, the 2017 Ignatian Award from Boston College, 2016 New Englander of the Year from the New England Council, the Woodrow Wilson Award for Public Service from the Johns Hopkins University, the Boston College Alumni Achievement Award, and the Jean Mayer Global Citizenship Award from Tufts University. He has a BA in History from Boston College (1978), an MA in International Relations from the Johns Hopkins School of Advanced International Studies (1980), and earned the Certificat Pratique de Langue Francaise at the University of Paris-Sorbonne (1977). He was a Visiting Scholar at the Woodrow Wilson Center for International Scholars in summer 2008. 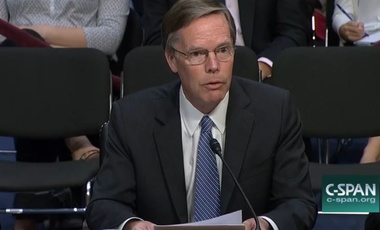 On June 28, Nicholas Burns testified before the Senate Select Intelligence Committee on Russian interference in European elections. He called President Trump's response to Russia's cyber attacks on the U.S. democratic system both "dismaying and objectionable." He says it's the "president's duty to be skeptical of Russia and that his refusal to take action is "a dereliction of his basic duty to defend the country." 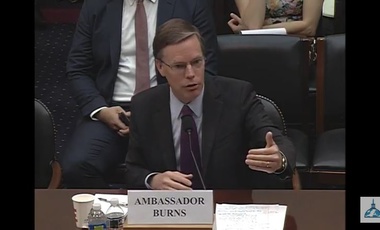 On March 28, 2017, Professor Nicholas Burns, alongside Stephen Krasner of the Hoover Institution and Danielle Pletka of the American Enterprise Institute, testified before the House Foreign Affairs Committee on the implications of the Trump Administration's proposed 31% reduction in the budget for the State Department and USAID for fiscal year 2018. 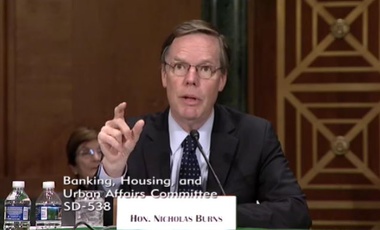 Senate Testimony on U.S. Sanctions Against the Russian Federation

On April 27, 2017, the COMMITTEE ON BANKING, HOUSING, AND URBAN AFFAIRS met in open session to conduct a hearing entitled, “Countering Russia: Further Assessing Options for Sanctions.” The witnesses were: The Honorable Nicholas Burns, Roy and Barbara Goodman Family Professor of the Practice of Diplomacy and International Relations, Harvard Kennedy School of Government; and Mr. Chip Poncy, President and Co-Founder, Financial Integrity Network.

The Aftermath of the G20 - Wisconsin Public Radio

President Donald Trump's time at the G20 Summit in Germany last week gained attention for his meetings with Russian President Vladimir Putin and Chinese President Xi Jinping. But it also included negotiations on a Syrian cease fire, millions of dollars toward a women's empowerment fund and disagreements on trade and climate. Where does this year's summit of world leaders leave the U.S.? 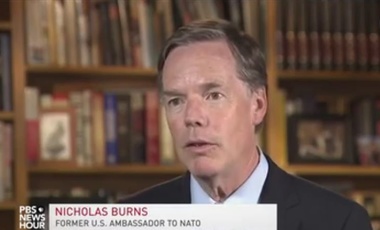 Why Trump and Putin’s undisclosed conversation is noteworthy

After President Trump sat down with Russian President Vladimir Putin on July 7 for a highly anticipated meeting at the G20 summit in Hamburg, he met with Putin a second time for a lengthy meeting, that was unattended by advisors and previously undisclosed. Nick Burns talks with PBS NewsHour on why this is significant. 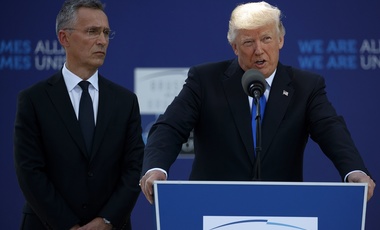 US-Europe Alliance is in Crisis

In this June 6 USA Today column, Nicholas Burns argues that American credibility and influence in Europe is at its lowest point in seven decades.

"Believe in the beauty, the power and the truth of our democratic way of life."

Nicholas Burns urges graduates to defend against rising populism in Europe and around the world during commencement at the American University of Paris. 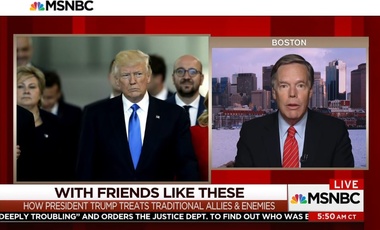 MSNBC's Morning Joe: Amb. Nicholas Burns and Adm. James Stavridis discuss President Trump's first overseas trip as commander in chief as well as Trump's stern NATO speech and what it all means for the world and U.S. 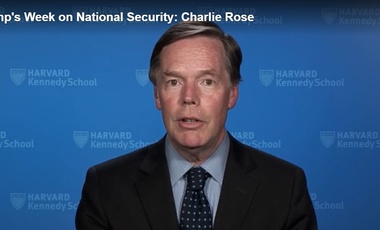 Professor Nicholas Burns and Future of Diplomacy Project Senior Fellow, David Ignatius, in conversation with Charlie Rose about the Trump administration on the national security stage. 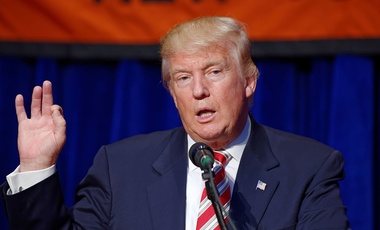 Nicholas Burns's April 7 op-ed in the weekend edition of the Financial Times on the U.S. cruise missile strikes against the Syrian Air Force. His major points are: 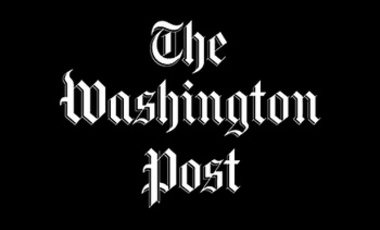 The Trump Administration’s threatened 37 percent budget cuts for the State Department and USAID, the most severe for any federal agency.  Professor Burns warns if these reductions are implemented, they will cripple the Foreign and Civil Service when we need them the most to cope with a weakening Europe, violent Middle East and strategic challenges to U.S. power from Russia and China.  He warns that this is simply not a sensible or wise path.

As President Kennedy said more than a half century ago:  “Diplomacy and defense are not substitutes for one another.  Either alone would fail.” 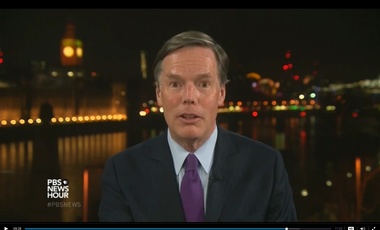 Why is Trump criticizing key allies to U.S. security?

Nicholas Burns joined the hosts of PBS Newshour to comment on Trump's statements regarding NATO and other U.S. allies.

How Trump Needs to Deal With Putin, NATO

Professor Nicholas Burns offers advice to US. President-elect Donald Trump on handling Russian President Vladimir Putin and explains the importance of Trump's choices for Secretaries of State and Defense.