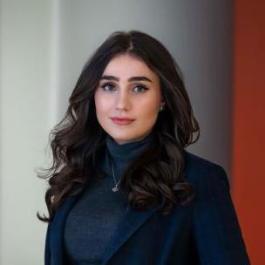 Nicole is a Stanton Nuclear Security Postdoctoral Fellow with the Belfer Center for Science & International Affair's Project on Managing the Atom at Harvard's Kennedy School. She was previously a predoctoral fellow with the International Security Program at the Belfer Center. Nicole received a PhD in International Relations and MPhil in Russian & East European Studies from the University of Oxford. Her research focuses on Russian and Iranian approaches to international order, with a particular emphasis on the global nuclear order.  Nicole’s doctoral studied the evolution of Russia’s relationship with Iran to understand how shared experiences of discontent with the nature of international order can form a basis of solidarity between states.

Nicole’s research project as a Stanton Nuclear Fellow concerns Russia, Iran, and the Global Nuclear Order. It advances the understanding of Russian and Iranian nuclear decision-making by contextualizing Moscow and Tehran’s foreign policy debates about the institutions which sustain the global nuclear order - deterrence, arms control, non-proliferation, and disarmament. The project adopts a historical-chronological approach to capture the changes and continuities in Russian and Iranian approaches to five aspects of the global nuclear order: 1) non-nuclear weapons states and the right to civilian nuclear energy; 2) rogue states, safeguards violations, export control, and black-market nuclear technology transfers; 3) nuclear proliferation and punitive sanctions; 4) the role of great powers, diplomacy, and non-proliferation; and 5) deterrence in an eroding nuclear order.

Nicole has published on a range of issues involving both Russia and Iran including their respective bilateral relations, Syrian Civil War, the JCPOA, and Eurasian regional organizations. Her research interests include international order and security, non-proliferation, the global nuclear order, Russia-Iran relations, and the foreign policies of Russia, Iran, and the states of Central Asia. Nicole has conducted extensive archival fieldwork and elite interviews in Russia, Kazakhstan, and Kyrgyzstan. She speaks Russian, Farsi, and French.