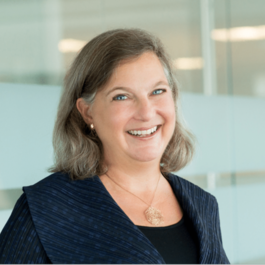 Ambassador Victoria Nuland is Senior Counselor at the Albright Stonebridge Group, a global strategic advisory and commercial diplomacy firm based in Washington, D.C.

She is also a non-resident Senior Fellow at the Brookings Institution, Distinguished Practitioner in Grand Strategy at Yale University, and a Member of the Board of the National Endowment for Democracy.  She was CEO of the Center for a New American Security, a bipartisan national security think tank in Washington, from January 2018 until February 2019.

A U.S. diplomat for 32 years, Ambassador Nuland served as Assistant Secretary of State for European and Eurasian Affairs from September 2013 until January 2017 under President Obama and Secretary Kerry.  She was State Department Spokesperson during Secretary Hillary Clinton’s tenure, and U.S. Ambassador to NATO during President George W. Bush’s second term, 2005-2008.  Nuland served as Special Envoy and chief negotiator on the Treaty on Conventional Arms Control in Europe from 2010-2011, and as Deputy National Security Advisor to Vice President Cheney from 2003-2005.  In addition to two tours at NATO in Brussels, she has served overseas in Russia, China and Mongolia, and in various assignments at the State Department in Washington.  Ambassador Nuland has a B.A. in history from Brown University.