In Bullets Not Ballots, Jacqueline L. Hazelton challenges the claim that winning "hearts and minds" is critical to successful counterinsurgency campaigns. Good governance, this conventional wisdom holds, gains the besieged government popular support, denies support to the insurgency, and enables military and political victory. Hazelton argues that major counterinsurgent successes since World War II have resulted not through democratic reforms but rather through the use of military force against civilians and the co-optation of rival elites.

Hazelton offers new analyses of five historical cases frequently held up as examples of the effectiveness of good governance in ending rebellions—the Malayan Emergency, the Greek Civil War, the Huk Rebellion in the Philippines, the Dhofar rebellion in Oman, and the Salvadoran Civil War—to show that, although unpalatable, it was really brutal repression and bribery that brought each conflict to an end. By showing how compellence works in intrastate conflicts, Bullets Not Ballots makes clear that whether or not the international community decides these human, moral, and material costs are acceptable, responsible policymaking requires recognizing the actual components of counterinsurgent success—and the limited influence that external powers have over the tactics of counterinsurgent elites. 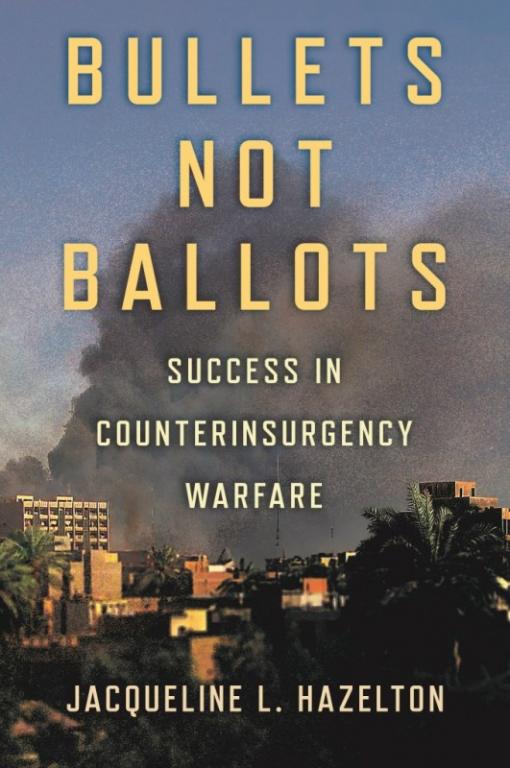 Praise for Bullets Not Ballots:

"Bullets Not Ballots is a must read for students of counterinsurgency. Hazelton argues that counterinsurgency is a brutal business where ruthlessness is essential for success. Emphasizing good governance and winning hearts and minds sounds noble, but they are formulas for failure."

"Counterinsurgency skips generations in American policy but the world keeps it coming back. Jacqueline L. Hazelton's challenge to the 'hearts and minds' doctrine raises uncomfortable questions about whether an effective strategy can also be humane. Whichever one's position, none engaged in this debate can afford to ignore her trenchant exploration of the dilemma."

"Bullets Not Ballots is an unvarnished and indispensable critique of counterinsurgency that doesn't shy away from the role violence plays in internal conflicts. Jacqueline L. Hazelton shines in her historical case studies, supporting a bold theory that forces readers to grapple with the costs and consequences of war."

"Jacqueline L. Hazelton offers an in-depth, unblinking look at counterinsurgency that tears away the many myths and misconceptions that have guided U.S. policy for decades, especially after 9/11. Bullets not Ballots is a tremendous contribution to the field."

"Jacqueline L. Hazelton eviscerates much of contemporary counterinsurgency thought with a well-argued assault on the importance of democratization, good governance, and protecting the populace. In Bullets Not Ballots she shows that counterinsurgency is violent state building where success depends upon co-opting elites and adept use of brute force."

"Bullets Not Ballots offers a provocative argument about the limits of "hearts and minds" counterinsurgency. Using a set of historical comparisons, Hazelton advances an alternative explanation for success and failure in counterinsurgency. As scholars and analysts grapple with the limits of American interventions since 9/11, this book provides important food for thought."

Paul Staniland, University of Chicago, author of Networks of Rebellion

"Jacqueline L. Hazelton makes the provocative case for the importance of military force and elite bargains in success against insurgent forces. Based on a careful analysis of five historical cases, Bullets Not Ballots will ignite academic debate and give pause to policy makers who pursue counterinsurgency."