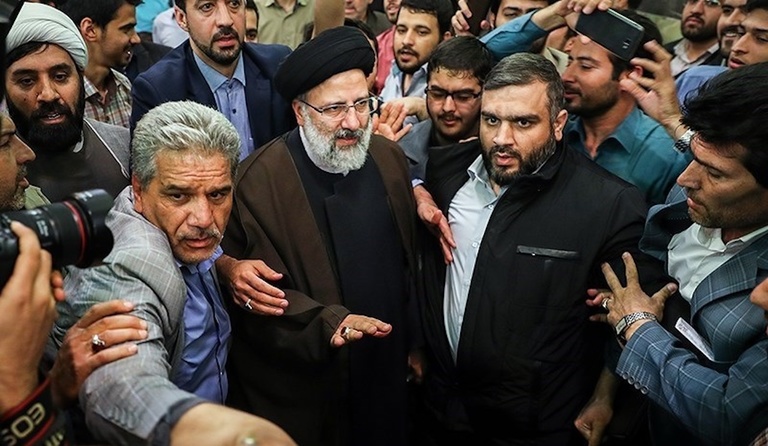 With the Iranian presidential elections on the horizon, indicators are pointing towards another shift in Iran’s factional alignments. Iran’s conservative and theocratic forces are overcoming the stark divisions within their power base and gaining significantly more unity and cohesion in their support of Raisi and opposition to Rouhani. Divisions between the conservatives grew during the Ahmadinejad administration as a result of his contentious policies and were cemented by the harsh international sanctions placed on Iran over its nuclear program in 2011. It is therefore important to understand why the conservatives have been able to close ranks recently and assess what implications this will have on Rouhani as it undermines his electoral coalition--a legacy which will remain beyond the elections and whether Rouhani wins or loses.

There are several reasons why the conservatives have been able to achieve a relative consensus and unity behind Raisi--most importantly due to the impending struggle over successorship to the Supreme Leadership. The electoral logic this year has been different than previous elections given the presidency’s influence in the larger battle over succession, all the more so since one of the candidates, Ebrahim Raisi, is rumoured to be a strong candidate for the Supreme Leader. Given these stakes, Ayatollah Ali Khamenei and his closest allies decided to pay the necessary costs to bring the coalition in line behind Raisi rather than allow the divisions of the past to persist. If the question of succession were not at play, it is more likely that concerted opposition to Rouhani would have been much weaker.

Secondly, the recent death of Ali Akbar Rafsanjani has deprived Rouhani’s carefully crafted alliance of elites its powerful political, economic, and spiritual godfather. With the loss of the vast personal networks and patronage of Rafsanjani, alongside his revolutionary credentials, the mechanisms and relationships cultivated between Rafsanjani and other leading political figures over the past several decades has experienced a major blow. Rafsanjani provided the space and opportunity for conservatives of various stripes to stake more diverse and even contentious positions--to move beyond supposed party lines without a stark sense of betrayal.  Today, such an endeavour is much more challenging, and we consequently see a convergence of revolutionary and conservative forces behind Raisi in explicit opposition to Rouhani, a position that was non-existent in the elections 4 years ago when conservatives such as Ali Akbar Velayati backed Rouhani’s position during the live presidential debates.

Third, a large part of the Iranian elite (as well as popular opinion) has grown disillusioned with the economic windfall they were expecting from the removal of sanctions. In particular, the absence of meaningful foreign direct investment (FDI) has raised concerns among the elite as to whether an economic development model based on strengthening relations with the West and acquiring significant FDI for the Iranian economy is viable in the first place. The perception that the door is closed to them to successfully pursue economic growth through outside capital investments thus pushes the elite to a different economic vision based on state-led economic growth, investment, and intervention, and strengthening the groundwork for economic cooperation with Russia and the East. This disillusionment, moreover, has been strengthened by the fourth factor driving increased conservative unity: the change in US administration and the ascent of President Donald Trump. The Iranian elite see the potential for increased hostilities with the United States especially given the confrontational statements aimed at Iran, the nuclear deal, and the threat to increase sanctions made by either the President or his allies.

Consequently, as a result of the greater cohesion of the conservatives, Rouhani’s reliance on segments of their support has become seriously strained. This defection has resulted in Rouhani moving more towards the reformist political camp and using more reformist discourse that crosses regime red lines in the election campaigning. While in 2013 Rouhani had adopted some reformist political rhetoric, his positions were portrayed as more moderate as he attempted to still paint himself as a centrist situated between Iran’s theocratic and republican factions. Such nuance is largely lost today as Rouhani has increasingly embraced green movement rhetoric and portrayed himself as the protegee of both Rafsanjani and Khatami. The choice of Eshaq Jahangiri, a faithful reformist, to act as a fierce critic during the debates was also a conscious move to galvanize perceived popular reformist support. Conservative attack ads and their general fiery rhetoric against Rouhani have also made the dividing lines between themselves and Rouhani clearer and more oppositional than ever before.

It will remain to be seen whether Rouhani’s reliance on the reformists will produce dividends in the popular vote, but it is quite possible that Rouhani could underperform.  By moving toward one side over the other, the ability to be a centrist loses meaning. All the while, conservatives have set aside differences in order to close ranks and present a united attack against the incumbent administration--what could very well be the key to Rouhani’s undermining.