The European Union at a Crossroads: Unlocking Renewable Hydrogen’s Potential

European countries are at a crossroads on their path to carbon neutrality. Today, they are at the forefront of the global clean hydrogen race but going forward they would be better served by collaborating instead of working alone.

Overall, the European Union (EU) is highly competitive in clean technologies manufacturing and thus well-positioned to benefit from the emergence of global hydrogen markets. But a narrow focus on short-term cost considerations could drive member states to implement national roadmaps with little or no coordination among themselves and hence little or no chance of competing globally.

As a bloc, the EU has pledged to reach carbon neutrality by 2050. Clean hydrogen is a cornerstone of this transformational effort; accordingly, in July 2020, the EU adopted its hydrogen strategy with the ambition of deploying open and competitive clean hydrogen markets for all energy sectors and segments by 2050.1

Success hinges around implementing a cohesive long-term strategy to address a fundamental ques- tion and its associated challenges: where could the EU source competitive and secure renewable hydrogen supplies?

As our previous research shows, all countries have access to renewable resources (such as solar or wind), to different degrees, and could produce some renewable hydrogen locally. However, while resource-rich countries, such as Spain, could evolve into regional exporters, no EU member state has the potential to become a global export champion. At the same time, North African countries, such as Morocco, are well-situated to act as key suppliers to the EU. Furthermore, imports from resource-rich regions like North America could help to address security of supply concerns.2

Today, EU hydrogen demand stands at 7.8 million tons per year (Mt/yr), equivalent to about 10% of global demand. Germany and the Netherlands are the largest consumers, accounting for over a third of EU demand, followed by Poland, Spain, Italy, Belgium, and France, which consume about 0.5 Mt/yr each.3 According to available projections, as hydrogen use grows across all economic sectors, EU hydrogen demand could reach 76 Mt/yr by 2050.

But while the EU strategy sets clear targets on electrolyzer deployment by 2030, it provides very few details on how the bloc could meet demand—and at what cost—by 2050.

We explain how the EU could meet its overall renewable hydrogen demand through the lenses of three reference scenarios, each focusing on a key strategic variable: energy independence, cost optimization, and energy security.

Each scenario analysis consists of three steps. First, overall renewable hydrogen potentials are calculated for each country (based on renewables, freshwater and land availability, infrastructure potential, and competing demand for renewable electricity). Second, each country’s production cost curves are computed (based on local renewable electricity and electrolyzers costs). Trade optimizations are then carried out (based on production cost curves and transportation costs).

Our analysis highlights how all three scenarios are viable pathways to meet the projected EU renewable hydrogen demand. Still, the overall market and geopolitical implications are significantly different in terms of the above key strategic variables and in terms of enabling infrastructure investment allocations.

Under the Hydrogen Independence scenario, renewable hydrogen trade between member states would account for almost 70% (52 Mt/yr) of EU demand.4 From an infrastructure perspective, pipe- lines from the Iberian Peninsula (Spain, Portugal), the Baltic states (Estonia, Latvia, Lithuania), and Denmark will need to be built across the continent to resource-constrained member states, in combination with import terminals for shipments from Ireland (Figure 1). 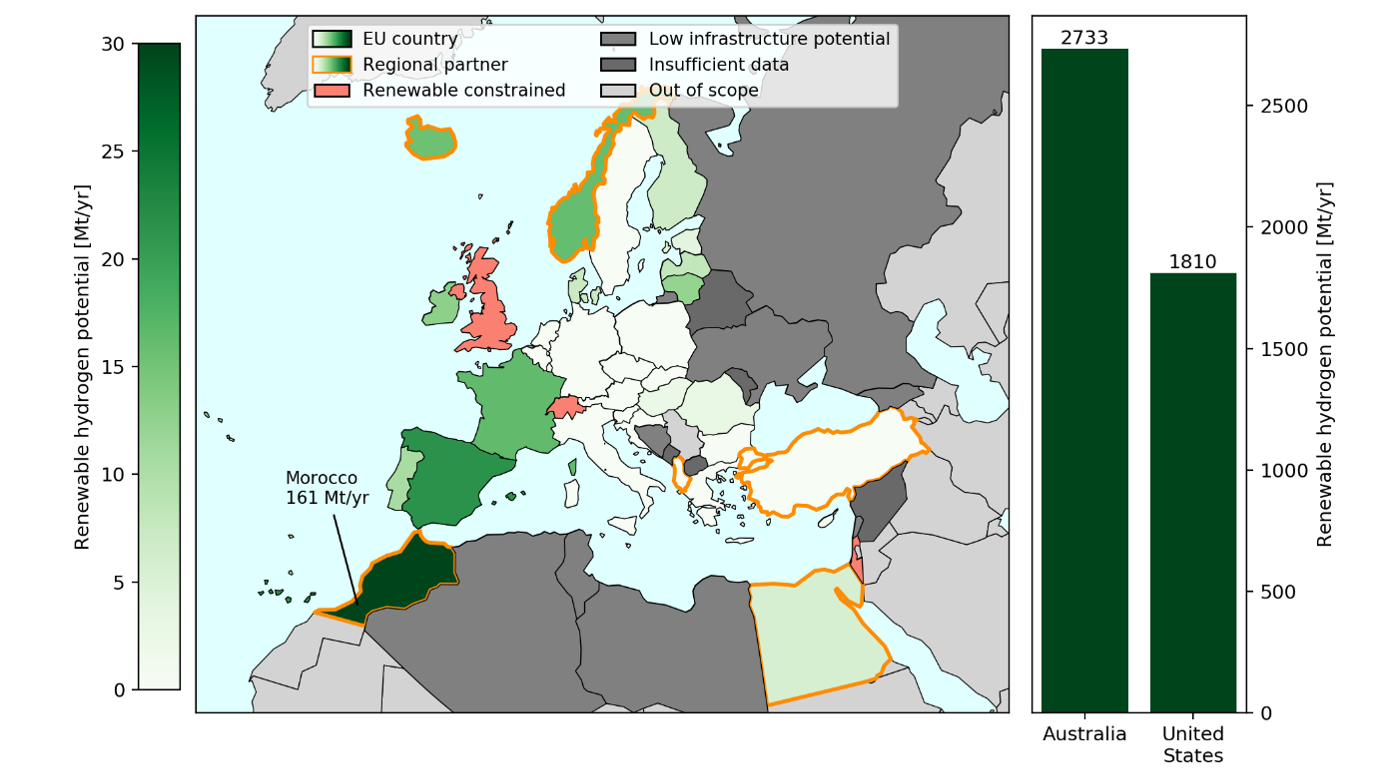 Imports could reduce the cost of meeting demand by up to 12%, thanks to the significantly lower production costs attainable outside the EU. Under the Regional Imports scenario, renewable hydrogen imports to the EU account for as much as 83% (63 Mt/yr) of demand, mainly from neighboring export champions (Morocco, Norway) and renewable-rich countries (Iceland, Egypt). From an infrastructure perspective, regional partners will have to develop internal production at scale, and overall investments in transportation infrastructure will increase by around 40%. At the same time, prioritization purely on cost could result in the EU relying on imports from Morocco for as much as 40% of demand.

To avoid replicating past patterns of energy dependence and security risk, the EU could diversify supplies by leveraging imports from long-distance export champions without increasing total supply costs. Under the Long Distance Imports scenario, Australian imports are not cost competitive due to the significantly higher transportation costs. At the same time, shipments of renewable hydrogen, as ammonia, from the United States can partly displace imports from Morocco and limit EU dependence on any single producer to 20% of overall demand.

In the end, today’s policy choices will determine which scenario will unfold, but policymakers need to carefully evaluate alternative requirements and competing needs.

Overall renewable hydrogen adoption at scale in the EU will require policymakers to:

Implementation of the Regional Imports or Long Distance Imports scenario(s) will also require the definition of:

Renewable hydrogen offers a unique opportunity to accelerate the EU’s transition to a low-carbon economy. Still, deployment at scale faces important challenges that neither the private nor the public sectors can address alone. Only by working together can the EU become a global leader in renewable hydrogen innovation and simultaneously contribute to its climate and energy security goals, a stronger economy, and a more integrated union.

This policy brief is the sixth in the Mission Hydrogen series, a collaboration between Harvard Kennedy School’s Belfer Center and the Italian Institute for International Political Studies (ISPI) on the future of hydrogen for the G20.