Aerial view of Guangzhou-Huadu Plain and Mount Baiyun from a Boeing 777 aircraft on Approach to Guangzhou Baiyun International Airport, the major airport of Guangzhou, Guangdong province, in Southern China, 9 July 2018.  In general, Guangdong has a relatively developed economy, a low-carbon industrial and energy structure, and a relatively high level of energy-use efficiency, but the problem of unbalanced and insufficient development remains significant.

This paper was prepared as background to a research workshop on Guangdong Province’s emissions-trading system. The workshop was conducted June 16–17, 2021, by the Harvard Project on Climate Agreements and the Research Center for Climate Change, Guangdong University of Technology (GDUT-RCCC), directed by Professor Zeng Xuelan. The authors are Professor Zeng; Li Weichi, Vice President, Carbon Market Development at GDUT-RCCC; and Guo Xingyue, analyst at GDUT-RCCC.

There are links below to Professor Zeng’s and her colleagues’ paper, in both Chinese and English.

Information on the workshop, including the agenda, participant list, and most presentations, is here. The Harvard Project’s initiative on Guangdong Province’s ETS is supported by Energy Foundation China. 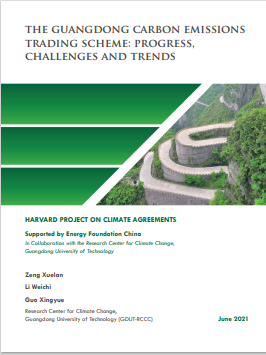 Guangdong Province ranks first in economic output among China’s provinces. Moreover, energy efficiency in Guangdong is already at an advanced level, compared with other provinces. With the introduction of China’s pledge to achieve carbon neutrality by 2060 and its approaching 2030 target for reaching peak carbon emissions, Guangdong, as a relatively developed province, is expected to shoulder even greater responsibility for emissions reductions. Guangdong Province introduced a carbon emissions trading scheme (ETS) pilot in 2013, which has now entered its eighth compliance year. The Province considers the ETS a key policy tool in achieving its more ambitious emissions-reduction goals. This paper examines the progress of the ETS in reducing emissions, design features of the system, challenges it faces with regard to further development, and its relationship to China’s new national ETS.