India's nuclear profile, doctrine, and practices have evolved rapidly since the country's nuclear breakout in 1998. However, the outside world's understanding of India's doctrinal debates, forward-looking strategy, and technical developments are still two decades 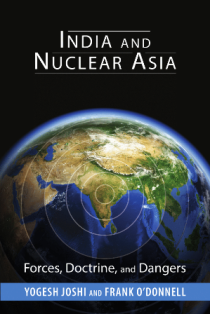 behind the present. India and Nuclear Asia will fill that gap in our knowledge by focusing on the post-1998 evolution of Indian nuclear thought, its arsenal, the triangular rivalry with Pakistan and China, and New Delhi's nonproliferation policy approaches. Yogesh Joshi and Frank O'Donnell show how India's nuclear trajectory has evolved in response to domestic, regional, and global drivers.

The authors argue that emerging trends in all three states are elevating risks of regional inadvertent and accidental escalation. These include the forthcoming launch of naval nuclear forces within an environment of contested maritime boundaries; the growing employment of dual-use delivery vehicles; and the emerging preferences of all three states to employ missiles early in a conflict. These dangers are amplified by the near-absence of substantive nuclear dialogue between these states, and the growing ambiguity of regional strategic intentions.

Based on primary-source research and interviews, this book will be important reading for scholars and students of nuclear deterrence and India's international relations, as well as for military, defense contractor, and policy audiences both within and outside South Asia.

Praise for India and Nuclear Asia

"A comprehensive and insightful study of India's nuclear capabilities and doctrine, and of the strategic environment in the larger South Asian region. This book will be a valuable resource for students, analysts, and policymakers."—S. Paul Kapur, United States Naval Postgraduate School