WASHINGTON — American intelligence officials are increasingly convinced that Crown Prince Mohammed bin Salman of Saudi Arabia is culpable in the killing of the dissident journalist Jamal Khashoggi, an appraisal that poses challenges to a White House intent on maintaining a close relationship with the kingdom.

Intelligence agencies have not yet been able to collect direct evidence of the prince’s involvement, American and European officials said. They also have not been able to conclude whether Prince Mohammed directly ordered the killing of Mr. Khashoggi, or whether his intention was to have Mr. Khashoggi captured and taken back to Saudi Arabia, according to one official.

But intelligence agencies have growing circumstantial evidence of the prince’s involvement — including the presence of members of his security detail and intercepts of Saudi officials discussing a possible plan to detain Mr. Khashoggi, according to American officials.

Officials have also said the prince’s complete control over the security services makes it highly unlikely that an operation would have been undertaken without his knowledge.

American intelligence agencies are preparing the assessment of Prince Mohammed to present to President Trump. The work was described by a half-dozen officials on Wednesday, as Secretary of State Mike Pompeo concluded a trip to the kingdom that failed to deliver an immediate diplomatic resolution to the crisis.

Officials said the intelligence agencies are trying to take care not to limit the White House’s policy options, and just put forward facts about the case.

Intelligence reports are only one factor that a White House must consider in concluding matters of national security. Mr. Trump could ignore the classified assessment as he decides what policies he believes are in the American interest, or decide he is unpersuaded by the intelligence.

Mr. Trump has pushed an explanation that a so-called rogue killer could be responsible for the suspected killing, but the intelligence agencies’ assessments could undermine that theory, which in any case has been widely discredited.

Mr. Pompeo’s trip to the kingdom was supposed to forge the beginnings of a diplomatic resolution.

But Mr. Pompeo’s private meeting on Tuesday with Prince Mohammed, attended by a small number of aides on both sides, was highly scripted, and he made no dramatic threats or ultimatums, said one former senior administration official who was briefed on the gathering.

At the State Department’s headquarters in Washington, some diplomats were dismissive when asked about Mr. Pompeo’s mission to Riyadh, the Saudi capital.

But a person familiar with the meeting said that privately, Mr. Pompeo sternly told the prince that even if he did not know whether Mr. Khashoggi had been killed, he would have to take responsibility to help the kingdom avoid the consequences of an international backlash.

Mr. Khashoggi, a Saudi who lived in Virginia and wrote for The Washington Post, entered the Saudi Consulate in Istanbul on Oct. 2 to gather legal documents ahead of his planned wedding. He has not been seen since, and Turkish security officials have privately said they believe Mr. Khashoggi was killed and dismembered by Saudi agents — an explanation purportedly backed up by a gruesome audio recording of his death.

A State Department spokeswoman said on Wednesday that Mr. Pompeo had not heard the tape. Top Saudi officials, including Prince Mohammed and King Salman, have repeatedly denied any role in Mr. Khashoggi’s disappearance.

On Capitol Hill, Senator Bob Corker, Republican of Tennessee and the chairman of the Foreign Relations Committee, expressed frustration that his repeated efforts to obtain an intelligence assessment on the fate of Mr. Khashoggi had been denied by the administration.

“I suppose they don’t want us to see the intel,” Mr. Corker said.

Publicly, Mr. Pompeo declined to discuss the case as he left Riyadh on Wednesday.

“I don’t want to talk about any of the facts,” Mr. Pompeo said. “They didn’t want to either.”

His response was quickly criticized.

Hours later, on his way back to the United States, Mr. Pompeo addressed the criticism that he had failed to hold the Saudis to account. He said he wanted “to give them the space to complete their investigations of this incident.”

“It’s reasonable to give them a handful of days more to complete it so they get it right, so that it’s thorough and complete,” Mr. Pompeo said after a brief stop in Ankara, the Turkish capital.

“That’s what they’ve indicated they need,” he said, “and then we’ll get to see it. We’ll evaluate this on a factual, straight-up basis.”

He said the relationship between the United States and Saudi Arabia was important for strategic and financial reasons.

“I do think it’s important that everyone keep in their mind that we have lots of important relationships — financial relationships between U.S. and Saudi companies, governmental relationships, things we work on together all across the world,” Mr. Pompeo said.

Mr. Pompeo spent just over a day in Riyadh, where news footage showed him nodding and smiling as Prince Mohammed spoke. It was a very different image than that of a cut-to-the-chase congressman who had blisteringly questioned Hillary Clinton about the 2012 attack on a diplomatic compound in Benghazi, Libya, becoming a conservatives’ hero.

“His instructions are clearly to preserve the U.S.-Saudi relationship at all costs,” said Wendy R. Sherman, a former top State Department official. “So his nonverbal cues and his remarks are intended to do that.” But, she said, “he could have taken off the grin, dispensed with small talk, said facts were important and the U.S. was committed to get them, and ended in a better place.”

At the White House, Mr. Trump said he would “have a long talk” with Mr. Pompeo about what he learned in Saudi Arabia and Turkey. “He spent a lot of time with the crown prince, and he’s going to have a full report,” Mr. Trump said.

Mr. Trump said that Saudi Arabia “has been a very important ally” and noted the kingdom was spending billions of dollars on American weapons. “When I went there, they committed to purchase $450 billion worth of things, and $110 billion worth of military,” the president said, claiming the orders were the biggest in the history of the world.

But the mounting evidence of Saudi perfidy has confronted the Trump administration with a grave foreign policy crisis. Saudi Arabia is a crucial partner in the administration’s efforts to isolate Iran and maintain security for Israel — all while keeping gas prices low.

R. Nicholas Burns, the third-ranking official at the State Department in the George W. Bush administration, said that Mr. Pompeo was “a serious and tough-minded person” — and that the public did not know what Mr. Pompeo said in private.

“But we have more important interests at stake. We can’t afford to have a business-as-usual attitude. This is a time to be stern with M.B.S., to disavow his government’s crime and to sanction Saudi Arabia,” Mr. Burns said, using the prince’s initials. “Our credibility as a democracy is at stake.” 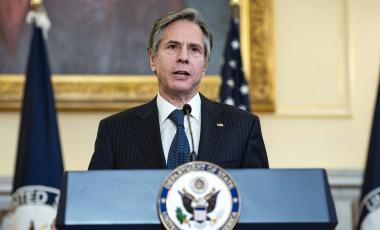 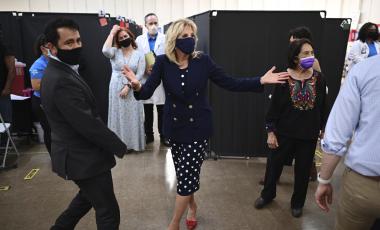 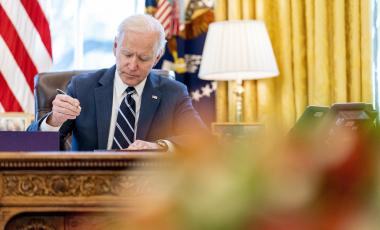