Resilience Drivers in the Healthcare System in Times of Conflict: The Case of Lebanon

Co-sponsored by the FXB Center for Health and Human Rights at Harvard T.H. Chan School of Public Health. 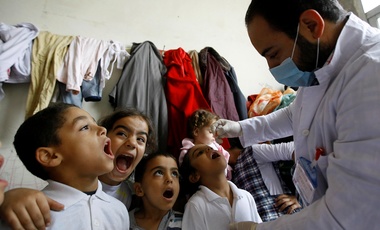 AP Photo/Mohammed Zaatari
Syrian displaced children line up to receive vaccination against polio at one of the Syrian refugee camps in the southern port city of Sidon, Lebanon, Thursday, Nov. 7, 2013, following an outbreak of the crippling and highly communicable disease in neighboring Syria.

Co-sponsored by the FXB Center for Health and Human Rights at Harvard T.H. Chan School of Public Health.

Dr. Randa S. Hamadeh is an internationally renowned Public Health Expert and Consultant. She is the head of the Primary Health Care and Social Health Department, and Manager of The Immunization and Essential Drugs Programs, at the Lebanese Ministry of Public Health.  She leads and coordinates the Universal Health Coverage Project run jointly with the World Bank. She contributed with unique leadership to creating a PHC network in Lebanon through which preventive programs and community health initiatives are launched, involving local municipalities and NGOs.

She lead to the introduction of the PHC facility accreditation program in Lebanon in 2008, and she is the vice chair of the national accreditation committee. She has numerous Publications and Research findings, some of which are taught among others at Oxford University. She contributes yearly as a lecturer and a panelist to International conferences in Public Health and Vaccines and she is an ADVAC (Advanced vaccinologist) member and an active participant in SAGE (Strategic Advisory Group of Experts) Global meetings. She is a member of various National Vaccines and Public Health technical committees. She has been an active contributor, in her capacity as a Primary Healthcare Expert and Lecturer to the 36Th anniversary of ALMA ATA Declaration in 2012.

In 2014, she was nominated for the UNHCR Nansen Refugee Award. In June 2017 Dr. Hamadeh was elected for a Public Health Excellence Award, Delta Omega Honorary Society of Public Health from the American University of Beirut. In 2017 she was unanimously nominated for the Randa Bdeir Leadership Award at AUB, an award established in recognition of outstanding leadership in supporting the careers of women. In 2017, the Arab league, and The Arab Hospital Federation   nominated Dr Hamadeh as the "Ambassador of Health in the Arab Countries."

She has actively participated in the foundation of various NGOs. Dr. Hamadeh has successfully promoted the partnership between the ministry of Health and the Academia. She is the preceptor of AUB Public Health students joining the PHC department for their residency programs since 2011. She holds an MPH degree, a Vaccinology Diploma, a medical certification diploma, and a PhD in Public Health.