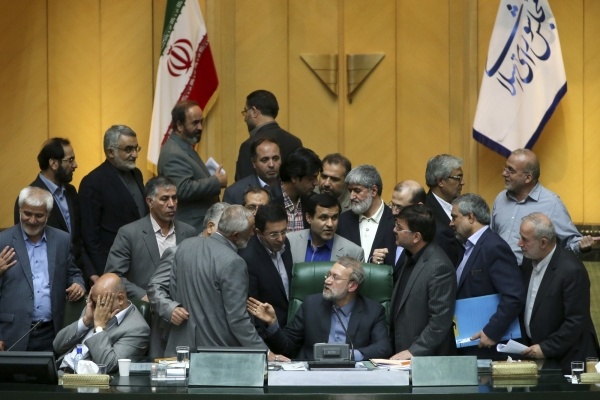 Members of the Iranian parliament (Majles) passed legislation on Oct. 13 approving the implementation of the nuclear deal reached between Iran and the West, the Joint Comprehensive Plan of Action (JCPOA). The legislation passed with 161 lawmakers in support, 59 opposed, and 13 abstentions. It was subsequently ratified by the Guardian Council, which vets all Majles legislation, and approved by Supreme Leader Ayatollah Ali Khamenei.

The bill was published only in Farsi; Iran Matters’ original English translation is below.

The author thanks Payam Mohseni for editing of translation.

Single article – The government, in the framework of the Supreme National Security Council resolutions, can voluntarily implement the Joint Comprehensive Plan of Action (JCPOA) under the conditions that the below rules and duties are observed in the implementation process:

1 - According to the fatwa of the Supreme Leader of the Islamic Revolution, no government in Iran has the right to produce or use a nuclear weapon, and the government is required to actively pursue a policy of global nuclear disarmament, and actively participate in all international, legal and diplomatic efforts to save humanity from the danger of nuclear weapons and their proliferation, including through the creation of zones free of weapons of mass destruction, especially in the establishment of a regional coalition of the Middle East Nuclear Weapon Free Zone, in particular in the area of the nuclear disarmament of the Zionist regime.

2 – The foundation of the Joint Comprehensive Plan of Action is based on cooperation and mutual respect, and any actions based on pressure or threat for any excuse on the implementation of the JCPOA or other reasons is cause for reconsideration of this cooperation with the assessment of the Supreme National Security Council, and it is necessary in such a case to take under consideration reciprocal actions in accordance with the resolutions of this Council.

3 – The government is required to carefully observe non-compliant actions by the other side in the area of the effective cancellation of sanctions, or the return of sanctions that were cancelled, and/or the imposition of sanctions under a different title, and to perform reciprocal actions to safeguard the rights of the Iranian nation, and to cease voluntary cooperation and facilitate the rapid development of the peaceful nuclear program of the Islamic Republic of Iran, such that within two years the capacity of national enrichment would increase to 190,000 SWU. [1] The Supreme National Security Council is authorized to address this issue. The government must present to the Council its program on this purpose for approval within a period of four months.

5 – The re-design of the Arak Heavy Water Reactor and also, if necessary, the exchange of enriched stocks [2] is subject to the finalization of certain and trusted contracts on alternatives and the attainment of confidence regarding their implementation.

6 – The inspections of the International Atomic Energy Agency should be carried out within the framework of international regulations and in accordance with the national security interests of the country as specified by the Supreme National Security Council, and the government must carefully observe that, during the implementation of the JCPOA and afterwards, secrets and classified intelligence, particularly in the areas of military and security, is fully protected. The level of cooperation with the Agency is subject to the precautionary steps taken by the Agency as necessary to guarantee this matter. In addition, Agency inspections of military sites and of actual persons under the pretext of the JCPOA is never permissible, except on a case-by-case basis and with approval of the details by the Supreme National Security Council.

7 – The government and the country’s armed forces are required to take the necessary measures, for the purpose of protecting the security and national interests of the country and supporting allies in the fight against terrorism, to strengthen the defensive capabilities of the Islamic Republic of Iran in all offensive and defensive fields, including air, sea, ground, and missile, and the creation of defenses against nuclear attacks and the manufacturing of propulsive devices, nuclear batteries, neutron imaging, and nuclear medicine, with vigorous and serious planning and implementation.

8 – The government and other state and public agencies are required to take the necessary measures, in the framework of the Supreme National Security Council resolutions, such that, due to the implementation of the JCPOA, room for opportunism and exploitation inside the country by America or other foreign governments is not permitted, and that the opportunity for political, economic, cultural, and security infiltration or exploitation at the service of the Global Arrogance does not occur.

9 – The government is required to spend the released financial resources in the framework of the law for the purpose of attaining the Resistance Economy and the growth of production, and to make the necessary investments prioritized for the needs of the private sector and to support of the National Development Fund.

[1] Iran’s target enrichment capacity, as announced by Khamenei in July 2014.

[2] Referring to stocks of uranium.