Arguably the key component of the bill remains unchanged: providing for expedited Congressional consideration of terrorism-related sanctions against Iran under two conditions: if Iran either (1) “has directed or conducted an act of international terrorism against the United States” or (2) “has substantially increased its operational or financial support for a terrorist organization that threatens the interests or allies of the United States.”

But other components have been removed, such as the repeated declaration that Iranian production of HEU would be unacceptable to the United States. HEU generally refers to uranium that is enriched to 90% U-235, readily usable in a nuclear weapon.

For example, the comparison below shows that Section 5 – security assistance to Israel – was revised to exclude the HEU trigger: 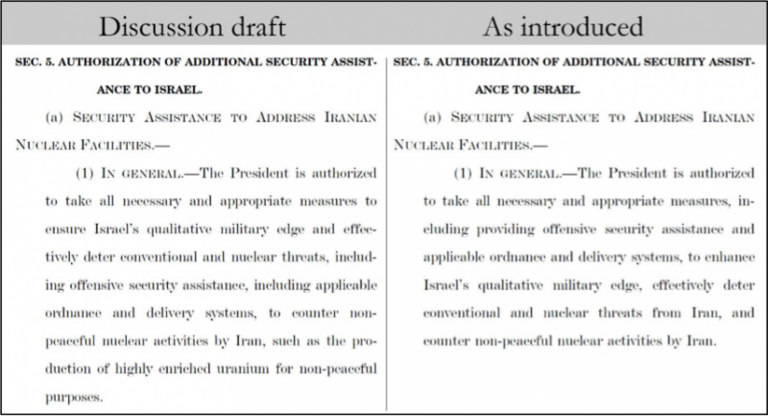 In addition, the requirement that the President report to Congress on the IAEA’s sampling methods at the Parchin facility was removed (see below). Parchin is a military site where the United States and the IAEA believe Iran conducted nuclear weapons research. Last month, Iran, under IAEA supervision, took samples at the facility. 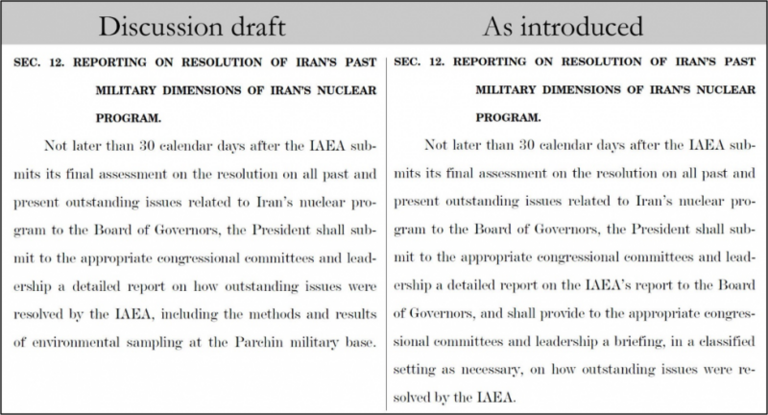 A separate section calling for the President to “conclude a multilateral arrangement” among European countries and others to limit arms exports to Iran was also removed, as was a requirement that the President make a formal “certification” before removing an entity from sanctions lists.

No Senate Republican has yet announced support for the bill. The White House said the revised bill is a “good starting point for discussion.”