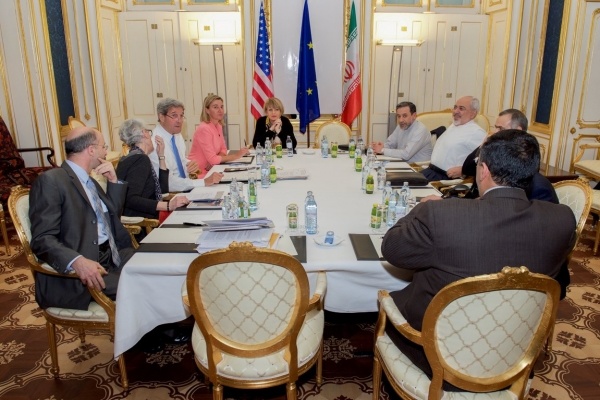 Secretary of State John Kerry and members of the U.S. delegation speak with Iranian Foreign Minister Mohammad Javad Zarif and the Iranian delegation in Vienna on July 11, 2015. (U.S. Department of State)

Nuclear negotiations with Iran have apparently reached an impasse over the future of United Nations arms restrictions against Iran. What are these embargoes, and why is there controversy?

The debate over the UN embargoes tends to conflate three separate restrictions: on the export of arms to Iran, export of arms by Iran, and restrictions involving ballistic missiles. Each restriction was codified in resolutions by the United Nations Security Council; the resolutions are recapped in the chart below, excerpted from the Belfer Center’s comprehensive guide to Iran sanctions:

Export of arms to Iran

Resolution 1929 prohibits states from selling or transferring seven weapons systems to Iran: battle tanks; armored combat vehicles; large caliber artillery; combat aircraft; attack helicopters; warships; and some missile or missile systems. It also prohibits the transfer of “related materiel” including spare parts. The resolution calls upon states to “exercise vigilance and restraint” in provided all other kinds of arms.

In addition, it calls upon states to inspect “all cargo to and from Iran” if the state has “reasonable grounds” to believe the cargo contains weapons prohibited above, and instructs states to “seize and dispose of” prohibited items.

Previously, Resolution 1747 called upon states to “exercise vigilance and restraint” in exporting those seven weapons systems to Iran.

Export of arms by Iran

Resolution 1747 prohibits Iran from exporting “any arms or related materiel.” Resolution 1929calls upon states to inspect, seize and dispose of Iranian arms exports.

In its first Iran sanctions resolution, the Security Council called on states to “exercise vigilance and prevent” the transfer of equipment that “could contribute” to Iran’s ballistic missile program (Resolution 1696).

What are the points of contention?

The key disagreement is over what type of sanctions these arms restrictions are. Under a comprehensive accord, Iran will receive relief from all “nuclear-related” sanctions – sanctions passed by the UN, US and EU to coerce Iran to negotiate over its nuclear program. But the US and EU have sanctioned Iran for a variety of other reasons, too, such as support for terrorism and abuse of human rights. Those “non-nuclear related” sanctions would stay in place.

The United States and the European powers disagree. According to the April 2 fact sheetreleased by the United States, “important restrictions on conventional arms and ballistic missiles, as well as provisions that allow for related cargo inspections and asset freezes, would also be incorporated by” the new UN Security Council resolution that would codify the comprehensive agreement.  Russia (apparently supported by China) supports a near term lifting of the ban on sales of heavy weaponry to Iran.

If no more negotiation extensions are issued, diplomats have until Monday to resolve this issue.