Watch the full Forum video on the IOP website »

Military and intelligence analysts and Ukraine scholars offered a somber assessment of the weeks ahead in Ukraine, saying that despite the resistance offered by Ukrainian fighters, the situation is likely to get worse before it gets better.

“I foresee worse coming in the days ahead,” said Carter, the Belfer Professor of Technology and Global Affairs and director of the Kennedy School’s Belfer Center for Science and International Affairs. “It’s going a lot worse than [Putin] expected. Therefore, there’s going to be some desperation. … I think he’s going to turn the dial up on the violence.”

Carter, who served as defense secretary during the Obama administration, said Putin has the forces to take Kyiv within weeks and that the Russian military doesn’t have a history of conducting itself with an eye toward minimizing civilian casualties.

He pointed to “unbelievably brutal” tactics used to subdue the civilian population of Chechnya, where casualties were estimated in the tens of thousands, and said that, if Putin appears interested in finding a way out of the conflict short of resorting to that brutality, Western nations should help him find it.

Carter said that while the timing was unexpected, nobody should be surprised that Putin took such a step, since he has made plain his grievances with the West and views of former Soviet nations since 2007, when he gave a speech in Munich that Carter said foreshadowed the hostilities.

“I think the Western family of nations came too late to a realization of what we have in Vladimir Putin,” said Carter at the event sponsored by the Institute of Politics.

Intelligence experts at another panel said that despite the seemingly chaotic nature of the initial invasion, the weight of Russian forces and superior firepower will likely prove decisive.

Analyst Michael Kofman, whose research focuses on Russian armed forces and military strategy, called Russia’s early operations “phenomenally shambolic” during a talk sponsored by the Intelligence Project at the Belfer Center, and moderated by the project’s director, Paul Kolbe.

“The initial Russian military campaign was premised on terrible delusions and assumptions, so it was a big miscalculation both politically but also militarily,” said Kofman, research program director for the Russian Studies Program at the Center for Naval Analyses. Kofman said the military assumed it could quickly overtake Kyiv; most civilians would flee or surrender; and Russian troops could avoid significant contact with Ukrainian forces. “That was all proven wrong,” he said, noting the Russians were plagued by logistical problems, poor communication, and low morale.

Kofman said that Russian forces have since reorganized and are moving to “pinch away slowly at the territory,” and he reminded that they also still have potent weapons that they’ve yet to fully deploy. “It’s important for folks to understand that Russian air power has hardly been used.”

Serhii Plokhii, director of Harvard’s Ukrainian Research Institute, said Putin drastically underestimated the sense of national pride, identity, and loyalty that has been building in Ukraine for almost 20 years. 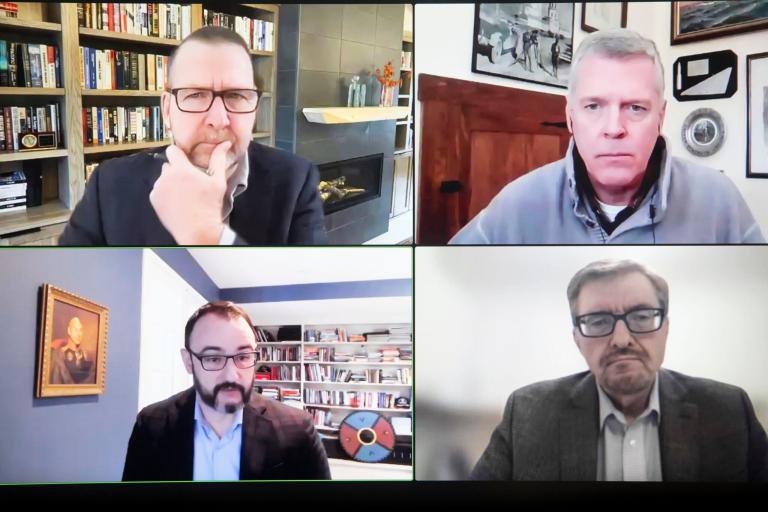 In 2014 Ukrainian President Viktor Yanukovych, who had the support of Russia, was ousted after rejecting a trade deal with the European Union, sparking a series of fierce protests. “The concept of taking up arms in defending your home and your homeland …  in 2014 and 2015 [that] became the foundation for the modus operandi of the Ukrainian Army and Ukrainian population at large,” said Plokhii. “This is a major, major change” for the former Soviet republic, which gained its independence in 1991.

But in warfare, national pride is typically not enough, suggested Kevin Ryan, retired brigadier general and current senior fellow at the Belfer Center, who previously served as Senior Regional Director for Slavic States in the Defense Department and as Defense Attaché to Russia.

According to Ryan, having 190,000 Russian soldiers present and plenty of advanced weaponry will matter more. “As bravely as they fight and as persistent their attempts at thwarting these advances are, I don’t think we can expect that they will be successful in that without intervention from the West.”

Panelists said they feared the worst of the fighting is still ahead and agreed that some form of division of the country might be a likely outcome. They also agreed that a nuclear attack was unlikely, but not impossible. Ryan offered up a scenario in which Putin could choose to explode a small tactical nuclear weapon to make “the nuclear deterrent real.”

Plokhii said his nuclear fears stem from the threat of contamination from a reactor being hit during the fighting. There are 15 of them in Ukraine, according to the International Atomic Energy Agency, which has expressed concern about the security of the facilities amid the fighting. Russian forces have reportedly taken control of some nuclear sites, including Chernobyl, the site of the 1986 meltdown.

Kofman predicted an end to Putin’s presidency, pointing to the crushing sanctions that are crippling the Russian economy. “I don’t understand how that person is long term going to hold onto power after this … not necessarily because of what’s happening in Ukraine, just because of what this gambit has done to Russia,” he said.

“I am deeply skeptical that a deal is going to be made here,” he said, “and I think there is going to be an assault on Kyiv. And only after that, will we actually see more serious discussions.

– Via The Harvard Gazette.
For more information on this publication: Belfer Communications Office
For Academic Citation: “It’s Going to Get Worse Before it Gets Better in Ukraine.” Video, March 2, 2022, posted by “Harvard Gazette”.