Lessons for the U.S. from Israel’s Iran Experience

In its attempts to deter North Korea from developing the capability to credibly threaten the continental United States with a nuclear weapon, Washington now finds itself in a crueler version of the strategic dilemma Israel faced in 2011 amid what it saw—or at least presented—as a closing operational window of opportunity to deal with Iran’s nuclear program. The basic structure of the crisis between the United States and North Korea is analogous to the challenge Israel faced when trying to dissuade or stop Iran from developing nuclear weapons.

Against a backdrop of continued Iranian uranium enrichment and progress toward a nuclear-weapons capability, Israeli Defense Minister Ehud Barak proclaimed in late 2011 that Iran was “probably three quarters” of a year from entering the “zone of immunity,” following which a physical strike on its nuclear installations would become impractical. The debate regarding Israel’s options, Barak warned time and again, was about to move out of the hands of decision-makers and into those of media analysts and historians. 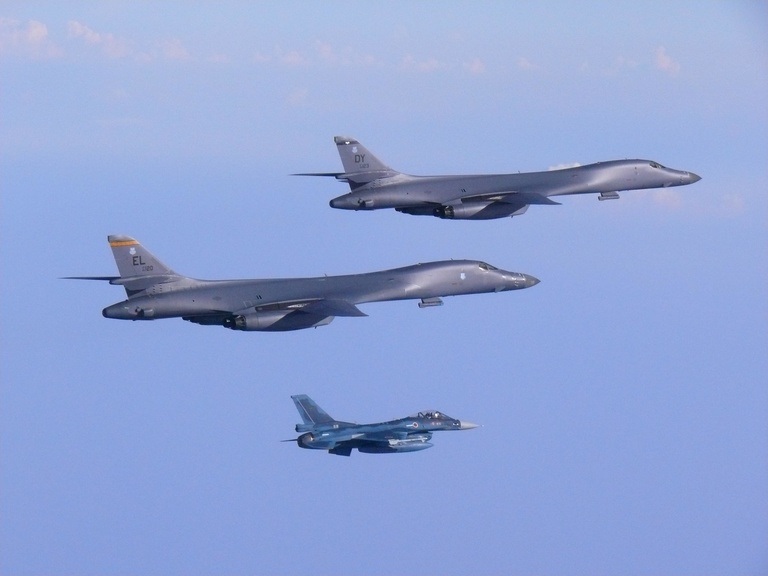 U.S. Airforce B1-B Lancers fly a 10-hour mission from Andersen Air Force Base, Guam, into Japanese airspace and over the Korean Peninsula, July 30, 2017. This mission is in direct response to North Korea’s escalatory launch of intercontinental ballistic missiles on July 3 and 28. Image Courtesy of the US Pacific Airforce Command.

Although North Korea has yet to demonstrate that it has reached the capacity hold the U.S. mainland at nuclear risk, to a large extent it already has immunity. In March 1994, North Korea famously threatened that if a war broke out,” Seoul would be engulfed by “a sea of fire,” a phrase that has since become an integral component of Pyongyang’s deterrence posture.

Today, with an arsenal of nuclear weapons, Pyongyang is in a position to warn against thermonuclear war on the Korean Peninsula and threaten U.S. allies and assets in the region. While Pyongyang has yet to reach the capacity to credibly threaten the continental United States with nuclear weapons, its recent test-fire of an intercontinental ballistic missile despite previous U.S. warnings suggests that it is fast approaching that stage. In his talks this week in Beijing, U.S. Chairman of the Joint Chiefs of Staff Gen. Joseph Dunford acknowledged that while war would be “absolutely horrific,” simply allowing North Korea “to develop ballistic missiles with a nuclear warhead that can threaten the United States” is “unimaginable.”

Crucially, then, the question of whether and how to prevent this potential game-changer, which would not only place the United States at nuclear risk but also disrupt the balance of power in the Korean Peninsula and potentially push others in the region to develop their own nuclear weapon, is not yet in the hands of historians.

Statesmen and observers of the developing crisis with North Korea would do well to examine Israel’s Iran strategy in late 2011. Having dispersed and hardened its nuclear sites, Iran’s nuclear program was largely resilient to Israel’s conventional military capabilities, meaning that Israel could damage but not destroy Iran’s nuclear assets. The immediate and long-term costs of a unilateral strike would have far outweighed the short-term benefits of a military strike. Therefore, rather than directly confronting Iran, Israel used its leverage in a deliberate attempt to influence the calculations of other actors, namely its principal strategic ally, the United States. It did so in a successful effort to pressure several world powers, most importantly the United States, into exerting their vast economic leverage on Iran. This strategy of extended coercion is similar to what the United States is currently trying to achieve vis-à-vis China.

The Iran experience suggests that the least risky way of confronting a resilient target state is for the party most concerned with the challenge to entrap a third actor that has leverage over the target state, and force it to care more about the nuclear status of the target state than it otherwise would.

In the Iranian case, Israel achieved this by establishing a credible military option against Iran and causing the United States to believe that it may be on the brink of unleashing a unilateral attack. This, the Obama administration feared, would ignite a regional conflagration into which the United States would be drawn.

Like Israel at the time, the United States now faces a resilient target over which it has minimal leverage, and against which, in the words of former Director of National Intelligence James Clapper, “has no real pre-emptory military options.” Like Israel at the time, Washington, too, has relied on a third party, China, which it says holds “tremendous coercive economic influence” over Pyongyang.

It is precisely such economic leverage that Washington now hopes could be used to reshape North Korea’s strategic calculus and pave the way to a solution. Indeed, as recent statements by National Security Adviser H.R. McMaster, Defense Secretary Mattis and Secretary of State Tillerson, and Senator Graham show, Beijing is perhaps the principal audience the Trump administration is aiming at.

Over the past two years I have researched the manner in which Israel not only established the perception of a credible military threat, but also led other audiences, whether its own defense establishment, prominent media outlets and journalists, or the United States, to infer that this far-reaching scenario could in fact come to pass. If there is a takeaway for the U.S. from the Israel-Iran case it is that progress is unlikely in the absence of a credible military option: neither the United States, nor Russia, China and the EU, were particularly enthusiastic in 2011-12 about casting Iran into economic isolation. But they did, at least partly, to placate Israel and reduce the likelihood of war. Although not the sole reason, Israel hastened the imposition of crippling economic sanctions on Iran because it made the possibility of a unilateral strike on Iran appear credible.

Was an Israeli attack ever truly in the cards? The question remains unanswered even after interviewing multiple senior Israeli and U.S. officials. However, the more important question, and the one most relevant to the current crisis with Pyongyang, is what led several key audiences to conclude that Israel might be prepared to unleash a strike.

Genuine, deceptive or both, the Israeli campaign, led almost exclusively by Barak and Prime Minister Netanyahu, was calculated, deliberate and costly. It displayed strict message discipline atypical of Israeli decision-making and politics, and employed a wide array of signals. Such signals included veiled public threats as well as behind-the-scenes measures that led other intelligence communities to suspect that Israel was on the cusp.

Amid such intense climate, the U.S. intelligence community began watching Israel closer. As Barak told me, “that atmosphere was a reflection of our actual real preparations. The Americans were following us, watching what we were doing and what the Air Force was rehearsing.” It was against this backdrop that the Obama administration was finally convinced to impose crippling sanctions on Iran, including on its Central Bank, leading to an oil blockade on the country and the expulsion of its financial institutions from the SWIFT system.

And while it could always be argued that the United States would have ultimately imposed sanctions irrespective of the Israeli factor, former senior U.S. officials agree that Israel’s military preparations “accelerated” the process. At the same time, sanctions and the prospect of a military confrontation with Iran helped to create the conditions for a diplomatic solution. Asked whether Israel’s perceived threat figured in Washington’s decision to engage Iran diplomatically, former Secretary of Defense Leon Panetta told me, “there’s nothing like a military attack to get your attention,” adding that the Israeli campaign “heightened activity both in terms of what we were trying to do militarily as well as what the administration was looking at diplomatically.” Ultimately, the direct talks between the United States and Iran produced the Joint Comprehensive Plan of Action.

The U.S. and North Korea last reached a meaningful agreement in October 1994, the Agreed Framework. As former Secretary of Defense William Perry has recently reminded us, that agreement was made possible by the fact that North Korea “believed that the United States was prepared to take military action.” A new agreement may very well require the same sense of urgency – and real military pressure – that was so present in the lead up to both the JCPOA and the Agreed Framework.

If the U.S. is ever to reshape or influence the strategic calculus of China—and by extension, North Korea’s strategic thinking—and create conditions conducive to a solution, it will have to bolster its bargaining position. It would have to employ not only the full weight of its economic leverage but also credibly signal that under certain conditions it is likely to make use of its military clout—even against Pyongyang. Indeed, the U.S. will need to render the incredible credible, and the unbelievable believable. Statements such as “all options are on the table” are unlikely to be taken seriously unless backed up convincingly. No U.S. threat, as far-reaching as it may be, is likely to be effective when a top presidential adviser and confidant flatly declares that “there is no military solution here; they got us.”

Surprisingly, Israel had never threatened publicly and explicitly to strike Iran. As Ehud Barak told me, when asked to explain how Israel established the perception of a credible threat against Iran, a distant regional power 80 times Israel’s size and with a dispersed nuclear program: “It was all real, which doesn’t necessarily mean that we would have done it.”

Regardless of how the current crisis is ultimately resolved, Israel’s strategic community is likely to draw some important lessons for the country’s own challenge with Iran—namely never to defer dealing with a potential strategic threat until forced to choose between the “absolutely horrific” and the “unimaginable.”