Featured in the Spring 2022 Newsletter » 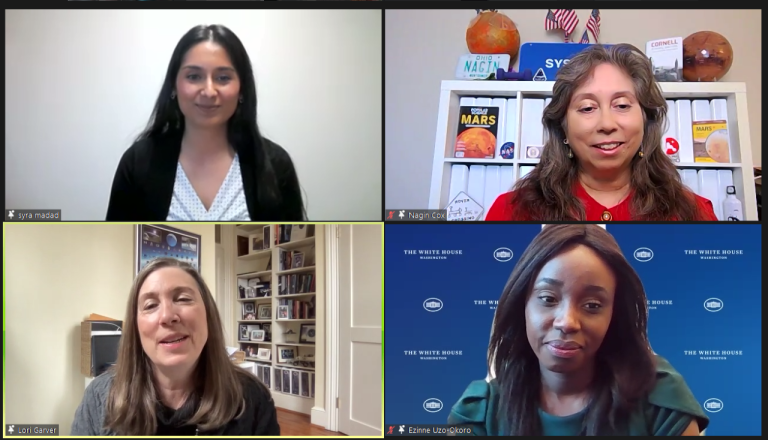 This series featured conversations not only about the vast and incredible work these women in STEM are doing—from medicine to content creation, technological innovation, space exploration and policy—but also touched upon significantly more personal issues such as the unique hardships women face in male-dominated fields.

While the women who participated in this series came from a diverse set of backgrounds, identities, and professions, a common thread tied all of them together—the experience of being a woman in STEM. Former White House Senior Advisor Jarrett shared her struggles to balance her career and motherhood, often feeling that she had to sacrifice parts of her life to succeed professionally. Epidemiologist and health content creator Wallace told of her experience with harassment and violence that has come as her online platform grows, noting that much of the criticism she faces has nothing to do with her qualifications, but the fact that she is a woman. Spacecraft Engineer Cox and Earthrise Alliance CEO Garver spoke about their struggles with “imposter syndrome,” a phenomenon that disproportionately affects women in their careers and educations.

These open and at times raw conversations between Madad, a mother and leader in infectious disease response, and the impressive line-up of guest speakers, shed light upon and created space to honestly discuss the complex and multifaceted experiences women face in the fields of STEM. This group of women shared invaluable advice and wisdom for other current and future female leaders in STEM, providing words of encouragement, tips for navigating male-dominated fields, and pathways to succeed.